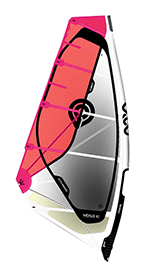 OVERVIEW
The Nexus is Goya’s five battened freeride sail, the larger sizes of which are “cut for more low end power and speed”. The Nexus range was completely redesigned in 2016, making way for the Mark as their no cam freerace contender. Changes for 2017 have been more cosmetic than comprehensive, this 6.4m possessing the same dimensional increments as last year’s model. Rigging on a 430cm RDM Goya mast, it requires a fair amount of tension due to its greater than average luff curve, yet remains one of the easiest sails in the group to set correctly thanks to its tuning method. Simply downhaul until the leech goes loose to the visual aid ‘dot’ in the upper panel, then fine-tune the extent of power required by determining the outhaul tension through the single clew eyelet. Setting with lots of shape and skin tension, the Nexus is a fine looking foil, with quality materials and detailing visible from every corner and trademark Goya features such as their Carbon Stretch Control tendons, used on their top of the line wave sails.

PERFORMANCE
One of the dearer sails in this test, the Nexus provides a class performance and a quality as a whole that is testament to the old adage “you get what you pay for”. Set for light marginal conditions, the Nexus feels its size in the hands, yet compliments it with such crisp, direct power that makes it incredibly useable. The movement in the luff tube helps to temper the instantaneous punch of the x-ply luff panel, and allows the Nexus to be used to great effect in pumping the board onto the plane. The centre of effort remains high in the foil, locked forward with all the skin tension and camber in the sail’s draft. Whilst pulling the rider naturally over the board, into a manoeuvre-oriented stance, the Nexus actually has a relatively low cut foot shape and is naturally very quick in a straight-line. As with last’s year’s 6.4m, we found that if we became enchanted by its efficiency and tried to lock it in with more effort, the sail performed adversely. Instead relax; let the sail adopt its favoured upright position and trust its unwavering structure to cope with the gusts. Before you know it, the sail will be accelerating in your hands and pushing the board to new speeds. In stiff winds and manoeuvres, its crisp responsive character is not for the faint hearted or nervous – the direct power coming from high as you knuckle down or re-engage after a transition. And yet, spend time tinkering with the outhaul to understand just how effective it is, and counteract the power with purpose and intent, and you’ll soon learn to relax into … and love the ride.

THE VERDICT
Direct, involving and unwaveringly stable, the Nexus is a quality outfit for those that want to be engaged when they go for a sail.