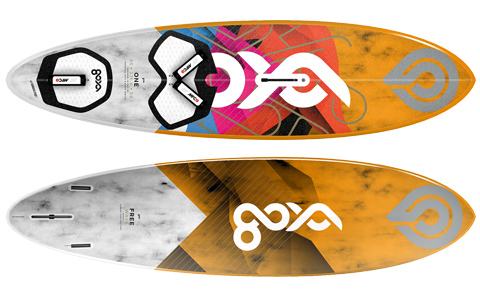 THE LOW-DOWN
The One range has been completely redesigned for 2016, the 105 now sitting as the second largest in the group, thanks to the introduction of a 115L version. With a unique bottom shape that progresses from mono-concave in the nose to double in the mid-section and vee in the tail, the One has a pointed nose and very rounded outline, being wide in the shoulders yet narrow and thin in the tail. Supplied with a single central fin, it nevertheless has the option to be converted to a thruster, with all three boxes sitting noticeably further forward in the board than others in the group. With a smooth dome to its deck and quite a flat nose shape, it is a very interesting design, dressed in its bright livery and supplied with MFC footstraps.

BRAND CLAIM
“On the wave or in flat water, speed is what excites us, so our first and foremost focus throughout the development of the new One has been to leave the water behind for as long as possible. Applying a narrower, more parallel tail outline and sharper rails, balances velocity with control.”

PERFORMANCE
We really got on well with the Goya One in year’s past, so were expecting big things from this latest incarnation … and we weren’t disappointed. That said, it is a very different style of board to others in the group and takes some time tinkering with its settings to really understand its credentials. Feeling compact underfoot for a 105, with the provided fin in place it accelerates smoothly as power is provided, the nose rising high and bestowing the board with a decidedly alert and engaging character as it hunts over the surface of the water. It is naturally quite fast, yet doesn’t really encourage a locked in or forceful stance, preferring a more upright posture to compliment its playful and energetic nature. It feels like a big waveboard – lively and manoeuvre-oriented – yet feeling light and incredibly responsive to changes in foot pressure, whilst remaining easy and forgiving in choppy seas. With this in mind, we had little doubt that the One would set our hair alight in a wave environment, yet when we changed to a thruster set-up, we actually got a little ahead of ourselves. With its fin boxes quite far forward, the One does still require a good deal of fin area to really release and retain its lively alert nature. We initially put too small a fin set-up into the 105, which made it slow to release and a little lacklustre. The best combination we found was a 27cm central fin placed close to the back of the box, and 2 x 10cm side fins. And in this set-up the One was electric in a wave-break, turning on a six-pence whilst being fast and lively through the park, inspiring the pilot to boost airs and try new stunts, safe in the knowledge they can motor upwind or out of danger at the drop of a hat.

THE VERDICT
Eye catching in both appearance and performance, the One remains easy and applicable for most to use, with a distinct leaning towards manoeuvre-oriented sailing. Time spent fine-tuning its fin set-up is rewarded with real potential and fantastic practicality in a wave break.