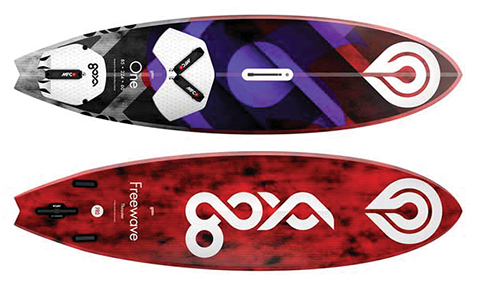 THE LOWDOWN
The One series has been established as Goya’s crossover exemplar for several years now, the range being completely refreshed for 2018 and staying current for the new season. The 106 tested here is the second largest in a four board lineup, each model produced in Carbon and S-Glass construction, the same as the brand’s reputed wave boards and their freestyle range – the Air. It has a very clean and flowing outline, a pin nose leading to rounded rails that end in a squashed tail. The straps and rider’s stance are then placed well forward on the board compared to others, said to add “more glide and natural flow”. Goya describe the One’s rocker-line as a three-phase configuration, taking leads from their race development and incorporating it with the gradual curves of their wave series, for the desired hybrid performance from both camps. The idea is that the character of the board can be altered significantly by adjusting its setup, varying it from inboard straps and the thruster fins supplied, to outboard straps and a single fin. We have to say, we were mightily impressed with the smaller 96L version we tried last year, so we were eager to put this 106 through its paces.

BRAND CLAIM
“Our dedicated one board to do it all, call it Freewave, Bump and Jump, inside or outside the bay, this is a one-board solution. The design with the most added range in our line, providing all the balance, early planing, power and control you can dream of.”

PERFORMANCE
With the One 106 configured with outboard straps and a 30 cm central fin, it rises up and planes progressively, feeling smooth and comfortable underfoot. The straps are very easy to locate, the contoured deckpads and MFC straps being some of the best around. It doesn’t dance on the fin or fully release for a loose electric ride, but rather retains composure at all times, with a grace and glide that helps the rider to relax and enjoy their water time. Perhaps a little calm and tempered on the flattest water, when the conditions turn on and the water state becomes more of a cauldron, this smooth controlled nature comes into its own, the 106 keeping its head and pacifying the harshest feedback. But take it into a wave arena and you begin to understand what the One is truly all about. With the supplied thruster fins in place and the inboard strap positions used, the One is a true gem around a break. With the rider’s stance well forward on the board (complimented with the fin boxes located well forward as well), the One has a lovely fluid nature, transitioning from rail to rail with such dynamic ease, more akin to a large wave board. It would be well suited for the most fickle float and ride adventures and even on the largest open faces, it simply never feels out of place, its fuller outline encouraging the rails to bite beautifully, whilst the grip through the rockered tail and thin rails always makes the rider feel connected. One of the more freewave biased boards in this group, it has masses of appeal, particularly for those looking for a dependable platform to make the most of the clean faces in light airs, where more dedicated boards would struggle.

THE VERDICT
The Goya is a smooth performer, cutting clean lines and driving around corners with the fluidity and confidence of a large wave board. Possessing enough life and speed for typical coastal blasting, it was most appreciated when put on its rail.