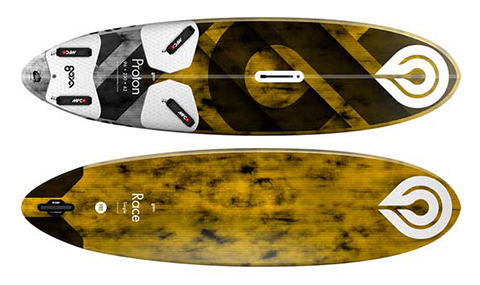 THE LOWDOWN
This is the second year we’ve had a Goya in the slalom test line up – a realisation that founder Francisco Goya is the first to applaud, as it’s a little known fact that he used to race himself. The middle sibling of a three board lineup, it is produced in the brand’s Pro construction with a fused cell core, wrapped entirely in a high-density foam sandwich (called Hyper Skin HD). Core axis reinforcements are then put in place and a combination of S-Glass and biaxial carbon are layered around the board’s surfaces. Care is then taken to keep weight to a minimum – it has a sanded finish on both its deck and hull, and only a single row of footstrap plugs are offered. And there’s no apology made in the Proton’s literature regarding its no compromise design either – it is unashamedly designed to win races. Sharp rails, no double concave in the hull and a scooped deck – all the elements are considered solely to maximise performance. Its cutouts are specifically designed to enhance the Proton’s glide out of the corners as well as its straight line speed. As with all these boards on test here, the Proton isn’t supplied with a fin (as it is assumed the riders interested in this style of board would already have their own preferred quiver of fins), yet they do recommend it for use with a fin from the MFC H1 catalogue. The fin boxes of this 116 and the 136 have also been reinforced to make them foil ready.

BRAND CLAIM
“The line has three sizes and is totally focussed on racing performance. We talk about winning races, wherever you want, no matter the condition. These three sizes cover any wind range. … The Proton range has been refined to the T of every detail, with rail shapes designed to deliver the best performance and control. The bottom shape is a pure slalom powerhouse, with every single millimetre dialled to make sure these boards are uber accurate. No compromise. The deck shape then allows the sailor a maximum level of comfort within the spectrum of the discipline of uncompromised racing.” Gabriel Browne

PERFORMANCE
Still one of the largest boards at rest, the Proton’s flat deck makes it incredibly stable, capable of carrying an 8.5m sail with ease. Apply the power and it releases effortlessly, the comfortable straps and grippy deckpads easy to locate before the board accelerates smoothly, feeling lively and engaging underfoot. Yet despite its crisp nature, the Proton is undoubtedly one of the most accessible in the group, feeling conventional and requiring relatively little input from the rider to trim right. Its boxy shoulders hover over the water’s surface, clear of any danger, whilst the broad tail provides plenty of traction and drive through the back foot. In light to comfortably powered conditions, you can cover great distances on the Proton, charging efficiently on all points of sail and rewarding the rider with plenty of feedback as it slips deftly through lulls or accelerates in gusts. It seems to remain connected to the water at all times, rather than flying high on its fin like others, meaning that it responds smoothly to changes in foot pressure. As with last year, we anticipated that the Proton would become a handful as the conditions became more severe, given its size, and yet almost the opposite is true. It sits in the water much better than we’d imagined, providing the easy exit route of standing up over the board and sailing in a more relaxed fashion if things get a bit too heated. This ability to easily regain control bolsters confidence to keep pushing, and the Proton is only too willing to oblige. The connected feel also plays its part in the gybe, allowing the rider to feel their way round the corner and adapt the turning angle accordingly, the wide flat deck forgiving of clumsy footwork as the board remains planted and glides through the exit.

THE VERDICT
With its wide wind range and impeccable manners, the Proton is one of the most accessible contenders in this group, and comes into its own in challenging sea states.