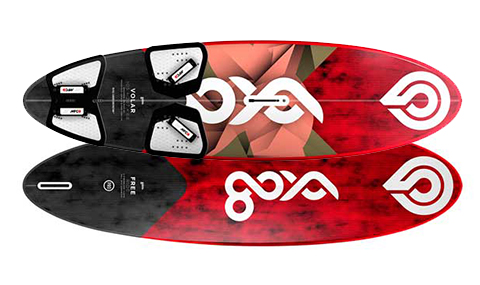 THE LOWDOWN
The Volar series from Goya stormed into our consciousness last year when we tested the smallest in the range – the 105. Fast, exciting and forgiving to gybe, we summed it up by writing: “The Volar displays the true potential of the wide and thin concept, making its lively and engaging riding style easily accessible to most. And that’s before you’ve got to the gybe mark…” So we were champing at the bit to see if this larger sibling was apportioned with the same sort of magic. Unlike its smaller sibling, this 115 (as with the two larger sizes) is available in either the more price-pointed Eco technology or in Pro construction as tested here, weighing in at an impressive 7.16kg, which made it the lightest in the test group. Its design is also quite standout, being easily the longest here and sporting fairly parallel rails, as it retains plenty of width in the shoulders. As with its smaller sibling, the 115 also has relatively little nose rocker, its profile thin and deck decidedly flat throughout, before finishing in a rounded tail in the rear. In addition, the rails themselves retain a hard edge to their profile along the length of the board, with relatively little tuck, more akin to a slalom style board than freemove. It comes supplied with single thickness high-adhesion deckpads, quality MFC straps (which have to be the easiest in test to adjust), masses of strap placement options, and a precision-milled MFC fin.

BRAND CLAIM
“The Volar is our ultimate windsurfing board, to grow, learn and be enjoyed at all levels. The Volar accelerates with each lightest breath of wind. On a straight line or gybing, the board rides naturally and stable, giving the rider all the confidence to push their level at every move. With its thinner profile the Volar feels as an extension of your body.”

PERFORMANCE
The first thing you notice when you step on the Volar 115 is just how long it is. At 249cm it is almost 20cm longer than the shortest in the group! As such it provides a super stable platform from the off, being both balanced and easy underfoot and tracking forwards effortlessly. Deliver power and it instantly responds, gathering pace smoothly. It is such a passive board to sail, requiring little intervention or instruction from the rider. Easy to ride and trim, it is also very comfortable for long periods of use, the board cruising cleanly over the water, leaving the pilot to adopt the stance of their choice. Its ease and refinement actually masks over the fact that the Volar returns a very respectable performance level, keeping up with most in the group in the right hands. Despite its thin flat deck, the edge of the back deckpad provides just the right purchase to really drive hard against the fin and force the board to the next gear. It also copes incredibly well in a harsh choppy environment, much more than we are lead to believe of a board of this length. The vee that runs throughout the length of the board plays its part, helping to keep the board on course and mitigating the impact of chop. In the gybe the Volar’s thin rails bite into the water and grip willingly, enabling the board to retain its speed and the rider to concentrate on the exit. It may not respond as well as others to a forceful style, yet provide simplicity and forgiveness instead – perfect for the progressing rider.

THE VERDICT
An easy, plug-and-play platform that offers lots of practicality and accessible fun. The Volar takes the honours for providing maximum enjoyment and return for minimal effort required.