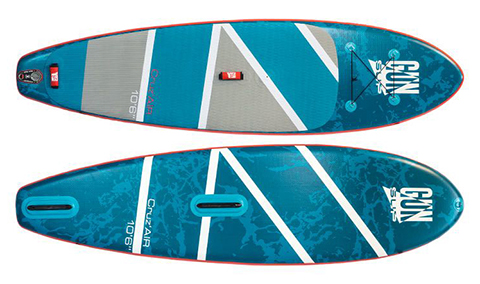 THEY SAY
The immensely wide range of uses makes the Cruz’Air our most versatile stand up paddle board. The range reaches from relaxed paddling for the whole family over smaller tours and riding small waves to windsurfing. All those who don’t want to commit themselves to a single discipline will be perfectly positioned with our all-round SUP board for every kind of use!

WE SAY
This is the first time we’ve had a chance to try a board from Gunsails, their 2019 inflatable SUP range comprising of five boards, from a wave focussed 9’10” design, right up to a race oriented 12’6”. All sport a similar graphic and colourway, and are produced using a pre-lamination process, requiring less adhesive and thereby reducing weight. The drop-stitch inside the board is reinforced to mitigate any twisting or torsion internally, before being layered twice with PVC laminates to seal the hull and make it watertight. A wide, red 0.9mm thick rubber rail band is then wrapped around the entire length of the rails to clean them up visually as well as provide extra durability in the board’s most vulnerable area. All the usual fittings are present, including a towing-eyelet under the board’s nose, a leash tether on the tail; handles (with neoprene padding) in the middle and tail of the deck, a cargo mesh, and an extended diamond-grooved EVA deck pad across much of the deck. The tail fin is a PE fin, standard in size, but the central fin supplied is described by Gunsails as a ‘Drag fin’ – a fin with an enlarged chord and area to help reduce downwind drift. Looking at the outline of the Cruz’Air, its widest point is located forward of its mid-point, tapering smoothly to a squared tail in the rear. Screwing the knuckle mastfoot into the board, there is a raised plate under the deck pad, providing reassuring reinforcement in a potentially vulnerable area. In windsurfing mode the board is balanced and buoyant under foot, its 6” thickness pushing its hull onto the surface of the water. As power is applied, the board slips easily through the water, the two fins working well to provide plenty of directional traction. It’s an easy board to get on with, picking up speed well and settling the power from the rig in the hands, whilst naturally holding a course close to the wind. In transition there is plenty of volume and support in the nose for the tack, whilst during the gybe, the deck pad changes to linear grooves in the tail, helping to determine how far back your stance is without looking. The volume of the squared off tail means the rider can step back in confidence and really exaggerate pivotal turns such as the flare gybe, helping the board to turn dynamically. A good weight carrier and tutor, it remains manageable as the wind increases, the traction from the fins doing their part to resist the windage felt through the hull. In stand up paddle guise, the Cruz’Air is equally at home, the deck pad providing plenty of traction under foot, whilst the ample width around the central handle offers plenty of stability whilst standing. When paddling in stronger winds, we did find the width and volume in the shoulders were buffeted by the wind, particularly if it were cross-shore, so to make life easier for the less experienced rider, keeping the ‘Drag fin’ in place helped to reduce the wind’s influence. Overall, the Cruz’Air is a well-considered and pragmatic plaything, ideal for summer fun with the family.