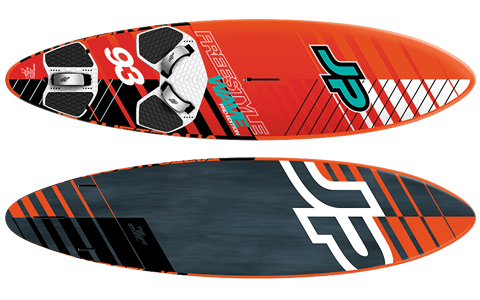 THE LOW-DOWN
Available in five different sizes, from 77L to 112L (the largest model being the only new design for 2016), the Freestyle Wave is classed as the “original all-rounder” by JP Australia. It comes in two different constructions (save the 77 which is only available in PRO), the PRO versions being supplied with a thruster set-up whilst the FWS models can only be set up as a single fin. The 102 tested here is the dearer PRO version and is the narrowest in the group at 62.5cm. Quite conventional in appearance, its wide point is placed centrally, tapering to a pointed nose with a steady even nose rocker and a narrow rounded tail, which nevertheless houses a fair amount of volume in its domed deck. This dome is present throughout the length of the board and leads to thin tapered rails, the outboard strap options being placed more outboard than on most of the other boards in the group. Supplied with a stiff 27cm central fin and two 10cm side fins, it equates to a lot of fin area protruding from the tail of the board, so we were interested to see how it translated to performance.

BRAND CLAIM
“Great all-rounders with an incredible wide range of use. They deliver a perfect balance of wave, seriously fast bump & jump and freestyle performance. All the Pro Editions also excel in all wave conditions (from side-on to side-off) due to the thruster setup.”

PERFORMANCE
Any fear we had that we’d soon be over-finned on the Freestyle Wave when the conditions picked up was quickly dissipated when on the water. Even in the upper reaches of the board’s wind range, its narrow domed tail provided the connection and comfort to cope. That said, the ride and nature of the 102 is distinctly lively and excited rather than subdued or placid. It engages the rider and simply asks to be thrown into the next transition, or projected off the approaching ramp. It is also fast and gunny, the traction provided by the fins helping to drive the board and release it further; the more powered it is, the more it comes alive! And whilst its crisp, active nature means it is not as easy or forgiving through heavy chop as some others in the group, the more experienced rider will perceive this as an endearing and captivating attribute, demanding more attention and involvement from them. Perfectly at home on flat water, the 102 really comes into its own when used in a coastal environment; its speed and liveliness making it a secret weapon for bump and jump, and its willingness to bite and grip in the carve inspiring the rider to drive in harder during the next transition. Its narrower width was noticeable when loaded with a sail much bigger than a 6.5m, but by the same token it certainly didn’t feel out of place in gusty 4.7m weather. But it was on the wave face the JP really stole the show, its sharp crisp character shining through as it willingly transitions from rail to rail. You can really feel the rails of the board, sensing its bite as if on a thoroughbred wave-board.

THE VERDICT
With the release and crispness of a fast bump and jump board, combined with the carving grip of a large wave-board, the 102 is a class contender to make the most of any coastal environment and comes highly recommended.