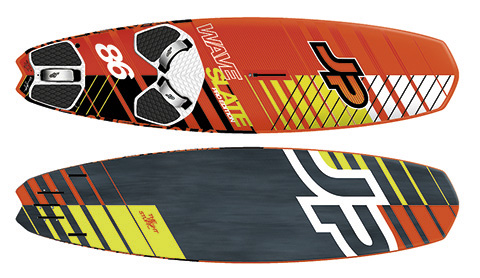 THE LOW-DOWN
Only available in Pro Edition construction, the Wave Slate houses five slot-boxes so that it can be set up as a quad, or in its standard tri-fin format with the three fins supplied. It has a unique bottom shape with a mono-concave throughout, becoming pronounced under the straps, which creates a long flat-section in the rocker through the middle of the board for speed and lift. The rails then have a constant curve to help improve its carving qualities.

BRAND CLAIM
“We were one of the first major brands to introduce the concept in our SUP range. Their great success made us think about developing it into a windsurf board as well. It not only looks totally different, it also gives the rider a totally new riding sensation. The foundation of this new concept is the parallel outline. It creates a lot of lift, produces speed and reduces drag. The cut off nose and tail offer a very efficient volume distribution. Therefore the boards are very stable, with reduced swing weight that makes turns and rotations really fast.” Werner Gnigler

PERFORMANCE
With noticeably less volume underfoot than the Fanatic, the Slate requires more rider input to release from the water in marginal conditions, but stuff it off the wind and it accelerates quickly, feeling sharp and responsive underfoot. Providing a fast and active ride, it is certainly engaging to sail, having a nervous, excited temperament. It encourages the rider to try new tricks off stunt ramps, feeling small and compact in the air, whilst making it easy to spot your landings. It also charges upwind like a steam train, giving the rider confidence that they can get around even the most difficult break with ease. We did try the Slate as a quad as well, using a couple of 14.5cm G10 fins in the rear slots, but preferred it set up as a tri-fin. It is super fin sensitive and seemed to benefit from the traction the large central fin provided. That said, the placement of the central fin also seemed critical – we found it worked best right in the centre of the box. On the wave face, the Slate’s speed is carried into the bottom turn where it seems to grip confidently and almost accelerate through the arc. It can adapt to different riding styles, happy either through the front or back foot and fuels the rider’s enthusiasm to see how much faster they can be projected towards the lip on the next wave. In thruster set-up the Slate carves and redirects off the lip beautifully, finishing the turn off without the nose digging in or stalling. Our only niggle is that we did find the non-slip on our test version was rubbing off, but we can put this down to having one of the first off the production line.

THE VERDICT
A sharp responsive board that rewards positive rider input with a versatile, captivating performance. With the speed and upwind ability to make it practical around any break, the Slate is a sensation on the wave and had the team heading back out with a smile time and time again.