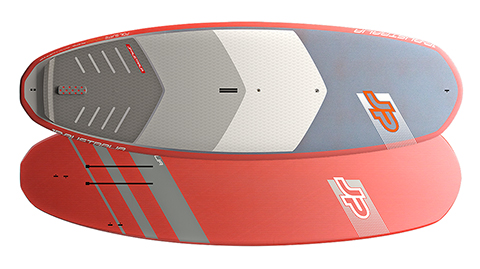 THEY SAY
In addition to the dedicated Foil boards we have also introduced the full line of Foil Slate boards that combine the proven Surf Slate shapes with the foiling option. The Foil Slates also have long track boxes for added windsurf foiling option.

WE SAY
The largest in a four board lineup, the 8’10” carries the Slate’s now familiar ‘compact concept’ we see in the associated windsurf boards, with parallel rails and squared-off nose and tail, giving it a boxy outline. The idea is to provide, stability and speed in paddling and glide, becoming ultra responsive once pushed into transition. It comes supplied with FCS fins, and massive 34cm US box tracks for use with a pedestal plated foil, its length making it capable of use in both wind foiling and sup foiling. There’s an ergonomic handle in the middle of the board, a mount for a GoPro camera on the nose, and plenty of grippy deck pad across much of the flat deck in the rear, albeit no footstrap options and only a single mastfoot location option. Used for stand up paddling, the JP is supremely stable despite its relatively narrow width, the wide tail and broad shoulders helping to provide the security, even to the nervous pilot. Directionally stable, it glides well enough, so as to not be out of place for flat-water cruising. Used for catching waves, we did find ourselves stepping back sooner than you would on a conventionally shaped board, to keep the shoulders high and clear. Happy to cruise along the face akin to a longboard, we were impressed with how it kept its speed, the tail shape feeling wide and stable underfoot for the light to medium weight riders in the team. Yet force the issue (which will be less of an issue for heavier riders), and the thin rails combine with the FCS fins to provide the grip required. Partner the Foil Slate with a sail and it works well for light wind freestyle and covering distance in comfort, the parallel rails aiding directional stability and mitigating any deficiency in the small fins. Whilst not really suited as a beginner / novice platform, it would be a good addition to a experienced rider’s quiver for those light wind days in practicing transitions and technique. The ability to use a foil with the JP however opens up a whole new dimension. We used it with Neil Pryde’s Glide Surf foil, screwing the nuts onto the tips of the bolts, before offering them up to the track. The vast track provides plenty of tuning variation, although we soon established that for wind foiling, the foil needs to be placed right at the back to maintain flight control. Accelerating across the water before lifting early, the Slate was a pleasure to use, feeling balanced and controlled with an upright stance over the board. It makes an ideal tutor for the novice wind foiler, the board releasing easily, under the influence of the sail before the foil can be brought to life. And if you get a little too much height and breach, the length of the Slate means you can easily recover from a nose landing. The Glide Surf foil comes with a short 65 cm mast, which worked well with the strapless and relaxed foiling posture the Foil Slate encourages. Some may find the foil’s response time too quick and immediate for their liking, yet it can be tempered through the use of the longer fuselage of the Glide Wind foil – something we were lucky enough to be able to try first-hand. There isn’t an option to fix straps and load the board; nor is there the ability to move the deck plate position, relying more on the movement of rider’s stance along the uncluttered deck to achieve the right balance. But for simple, uncomplicated fun, from SUP’ing in all environments to wind foil cruising, the JP has much to offer.