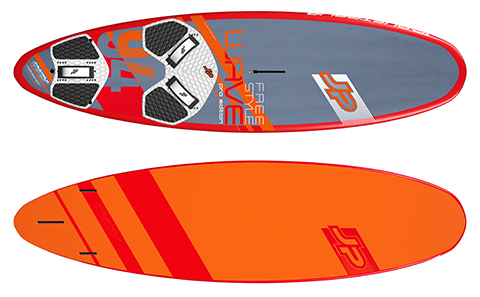 THE LOWDOWN
The Freestyle Wave series from JP is nigh on as old as the brand itself, and has produced some class-defining models in the past. This 103 remains unchanged for 2019 (being one of five sizes in the range), with all bar the smallest sibling available in either Pro or Full Wood Sandwich construction (the 79 coming solely in Pro). The difference in technology is married with a change in fittings – the Pro coming supplied with thrusters, whilst the FWS versions opt for a single fin and no conversion option. As with the 94 tested last year, the 103 has adopted some of the lessons learned in compact design from the Wave Slate, and mixed them with the virtues more commonly associated with the FSW dynasty. For example, it has a slightly narrower outline than a conventional board, its rails more parallel in its mid-section … and yet unlike a contemporary compact design, the tail remains narrow, said “to maintain control on fast runs over choppy water”. Complete with dual density deckpads (including raised heel cushions under the back pad) and a number of inboard and outboard strap positions, the brand state in their literature that the tuning potential of the FSW allows it to “fulfil every windsurfer’s dreams”.

BRAND CLAIM
“The Freestyle Wave concept is the ideal option for 99% of coastal-sailing recreational windsurfers.”

PERFORMANCE
Using the Freestyle Wave with its supplied fins, it possesses plenty of traction and drive as power is delivered, responding and accelerating rapidly as it is pushed off the wind. There’s plenty of stability underfoot despite the narrower outline, providing time and margin for error should the pilot be more tentative. The ride of the 103 is lively and engaging without being too direct or intimidating – it certainly feels alive, yet its balance and control are not in question. Even in harsh seas, the straight double concave under the front straps seems to keep the board planted, cementing its secure, dependable nature. The fins supplied work well whatever the riding preference, yet should be changed and experimented with to really understand the true capabilities of the 103. With outboard straps and an upright 32 cm fin in place, it can be loaded and pushed to an impressive speed, flying more freely on its fin as the heel cushions provide an extra edge to lock and drive against. The narrow tail and thin rails help to exact authority and comfort in the rider’s stance, making the 103 a lot of fun for use in a high-wind coastal blasting or bump-and-jump role. In the gybe its security and speed inspire confidence to enter the turn with conviction, rewarding with an easy, efficient glide that will flatter most upon exit. Hit a ramp at speed and the board releases instantly, feeling compact and manageable in the air. For wave riding, we did find the large area and stiff nature of the G10 central fin supplied quite limiting, particularly for lighter riders or challenging cross-onshore conditions. Changing it to a ‘flexy’ 22 cm wave fin however, and the performance available was magnified considerably. Balanced on both feet, it feels much looser and freer through the tail, maintaining its speed through a bottom turn, the thin rails and side fins enabling the rider to really sense the grip and use it to their advantage.

THE VERDICT
Lively and involving with a fast efficient nature, the JP combines ease and stability with real adaptability, giving it masses of user appeal. Just be sure to invest in a variety of fins to really explore its vast potential.