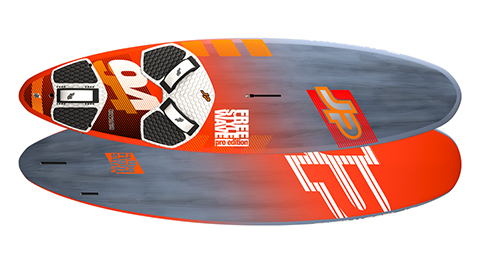 THE LOW-DOWN
JP has completely redesigned their Freestyle Wave range for 2018, this 94 being the middle sibling of a five board line-up. Available in either Full Wood Sandwich as a single fin, or Pro construction with a thruster fin set supplied (as tested here), it has been completely reworked using the lessons learned through the development of the new Wave Slate. Shorter, with more parallel rails through the mid-section (for improved stability and early planing), the new design is said to be more direct and responsive in feel, whilst the tail remains narrow for control in rough waters. The biggest change is in the bottom shape, the FSW now using the straight double-concave concept under the front straps, flanked by vee with double on either side. This is said to provide comfort in a straight line, whilst the vee in the nose and tail increases the rocker in the board’s rails and thereby improves carving manoeuvrability. With its rounded diamond nose and chamfered tail, it is certainly an eye-catching design in silver and blood-red, and comes complete with dual density deck pads and four JP Velcro straps.

BRAND CLAIM
“Werner Gnigler merged the advantages of the new Wave Slate with all the great abilities of the former Freestyle Wave generations. This makes them our fastest, liveliest and most manoeuvrable all-water toys ever. They accelerate in the flats, fly over chop, carve in waves and are a thrill to ride. You’ll just simply have your best time on the water – easy!”

PERFORMANCE
Despite feeling quite small underfoot initially, the JP is stable and balanced at idle, carrying weight well and releasing effortlessly as soon as power is provided. The straps are easy to locate and the acceleration through gusts is very apparent. It’s certainly a fast board, sitting on the surface of the water, yet super comfortable and planted, giving the rider the confidence to keep ploughing the power in to discover the board’s top end. This speed and control make it rewarding to use in any sea state, but particularly around a coastal break in a bump and jump role. It is directionally very stable, no doubt in part to the large fin area provided by the supplied fins, which in turn help it to point high to the wind and maintain drive through prolonged lulls. It is also very easy to tack, the balanced volume distribution and speed carried through the turn helping to provide extra margin for error. As the wind increases, the JP doesn’t ever feel over-finned (despite us being very conscious it might), its narrow tail helping to maintain control in heavy seas, allowing the rider to relax and adopt the riding style of their choice. Take the 94 into a break and waveriding doesn’t come as naturally as it does to some in the group. Comparing its fin setup and geometry to others gives us a clue why – the side fins are well spaced out on the rails yet possess little tow-in to their orientation. As a result the JP does feel a little stiffer on the wave face, but it’s a fair trade-off for its ease of use, speed and practicality for other conditions. Change the fins or learn to adapt to its carving style and you can soon make use of the speed that the FSW willingly carries through every turn.

THE VERDICT
JP’s new Freestyle Wave upholds its heritage in this category, being one of the top all-rounders in the test group. With early planing ease, accessible speed and manoeuvre control in just one setting, it offers class defining plug-and-play performance that both flatters and inspires.