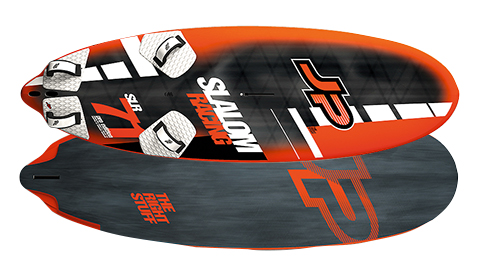 THE LOW-DOWN
The 71 is the third largest in the JP Slalom line-up and remains unchanged from last year, although it didn’t quite arrive in time for our slalom board test in 2016. In fact, it is the only design that remains the same in the brand’s extensive 2017 seven board slalom range, running from 78 to 131 litres. The qualities and features of the 71 have obviously struck a chord and been filtered into the rest of the series. Short and compact, it retains plenty of width in the nose and tail, making its sharp, minimally tucked rails very parallel in outline. The standout feature of the 71 though is the tail – home to several tiers of cutouts, which in effect create two different tail outlines. The deck is wider, providing more purchase on the fin through the back foot, said to provide “better acceleration and a looser, faster ride”. The hull’s tail shape is then much narrower, reducing wetted area and improving control, akin to sailing a much smaller board. Combine the detailed tail design with the hard rails and significant deck scoop in the nose and mast track, and the JP certainly looks every bit the full-blooded racing machine. Its profile tells the same story – thin in the nose and boxy in the tail, putting the bulk of the board’s volume right under the rider’s feet. It comes supplied with the brand’s Velcro straps (which include an extra neoprene wall in the internal webbing for more comfort), and thicker deckpads than on most of the other boards here, with a contoured diamond pattern for maximum traction.

BRAND CLAIM
“We never put more effort into developing our Slalom line. Werner Gnigler made more prototypes than ever. Our main riders, led by Malte Reuscher and Nico Warembourg, tested them around the globe to make sure that they work in all kinds of conditions. It was great to see how motivated and hardworking those young talents were – and it paid off.”

PERFORMANCE
With its flat deck and volume in the tail, combined with the significant scoop around the mast track, it feels as if you’re standing at the top of a hill when on the JP at idle, the board low and connected to the water. As the wind fills the sail however, and you rock onto your back foot, the board’s stance changes instantly, accelerating and releasing from the surface like a water born missile from a submarine! The straps are easy to locate despite being right on the rail, the dome of the rails and deckpads combining to provide plenty of traction and comfort. Skimming efficiently above the water’s surface the JP feels alert and free, yet trims itself effortlessly, requiring little input from the rider. In fact, we found it almost counterproductive to try and push the 71 to force the issue. Instead, relax into it and let the board do the work; adopt a more passive upright stance and the board rewards with a blistering turn of speed. Feeling compact and responsive underfoot, it changes its point of sail effortlessly and covers distance in comfort, with a degree of control that really took us by surprise. Its stance in the water is unwavering, whatever the wind strength or sea state, it simply hugs the surface with a low nose, encouraging the rider to hunt for the next gust and keep accelerating. In the gybe, the JP bites in well and whilst undoubtedly responding best to a committed style with drive provided throughout, it remained very controlled and versatile. It provides excellent feel and feedback, responding smoothly should you wish to change the radius mid-gybe.

THE VERDICT
Compact and potent, the JP has an incredibly alive nature that initially hides its near unflappable stance and incredible posture on the water. Responding well to a more relaxed riding approach – just let the board do what it wants to do and you won’t be disappointed!