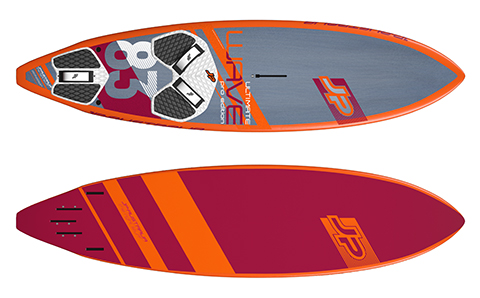 THE LOWDOWN
The Ultimate Wave is new to JP for 2019, replacing both the Radical Quad and the Thruster Quad and said to marry the best qualities of both. The “breakthrough in development” was the complex bottom shape, which displays a mix of everything, most noticeably a deep mono-concave between the straps. The other very noticeable attribute of the 88’s design is its outline, with wingers maintaining width between the straps, before allowing the rear to narrow quickly to an incredibly thin, squashed tail. Combine this with a sharp pin-nose and a domed deck throughout and the 88 has a decidedly exciting, if not business-like appearance. Supplied as a quad, it comes with the extra box to allow for a thruster setup and at just 6.15 kg it is comfortably the lightest in the group. Produced in Pro construction, it uses S-Glass technology, with PVC stringers and Innegra rails for increased durability.

BRAND CLAIM
“…The result is Werner Gnigler’s development of an outstanding design, which merges the virtues of its predecessors – the Radical Quad’s looseness, reactivity and rail bite and the planing power and speed of the Thruster Quad. Consequently, a name was chosen which says it all – the Ultimate Wave!”.

PERFORMANCE
Despite its quoted volume putting it comfortably within this test category, with its narrow outline and extremely tapered tail, it came as no surprise that the JP felt one of the smallest in the group. Provide power and stuff it off the wind though and it soon gets the message, accelerating like a guided missile. It is undoubtedly fast, feeling energised and lively underfoot. As a quad it has quite a unique nature, sitting high on the surface of the water as it dances over chop, the mono-concave under your feet making the ride crisp and engaging. On a smooth open wave face the Ultimate Wave was a dream to use – the grip and response through the tail of the board helping you to really feel connected. The thin tail provides so much opportunity – you can consciously pull the tail underneath you mid-way through the bottom turn, maintaining speed as it bites precisely and redirects you more vertically up the face. Then at the critical moment it can transition from rail to rail in an instant, allowing you to push hard through the tail and throw buckets of spray. As the conditions turned on, the ‘busy’ attitude of the Ultimate Wave becomes more apparent, meaning you really had to bring your A-game, the board’s high stance and light weight making it susceptible to being bounced around if you aren’t concentrating. In more challenging conditions (particularly confused cross-onshore seas), we found the 88 was more settled and planted when used as a thruster, the extra directional traction helping the board to be pinned down and driven more comfortably. The extra control comes as a result of a little loss in speed, the JP feeling compact yet alert, inspiring the rider to hit ramps hard for aerials or drive more purposefully through their bottom turn. Rewarding positive, pro-active riding styles, the Ultimate Wave responds best when powered and feels at home in any wave environment, from the largest smooth faces to tight cross-onshore chunks. The more energy you put in, the greater the reward.

THE VERDICT
One of the smallest in the group, the Ultimate Wave needs the power of wind or wave to turn on, but once it’s lit up, its crispness, speed and precise response are so addictive, you’d be hard pressed to put it down. It’s adrenalized riding bottled in a board!