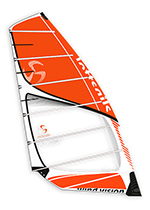 OVERVIEW
This is the first year we have had a chance to try the Oxygen from Loftsails, classed by the brand’s founder and designer Monty Spindler as the mainstay and pillar of the whole brand. He goes on to say the Oxygen has been completely redesigned for 2017, with a new luff curve, new profile pattern and “new take-ups and releases in the leech”. Taking technological developments directly from their race programme, the Oxygen possesses Loftsails exclusive 3.5mm biax scrim in the upper panels, complementing it with use of 5mm triax laminates in the leech and foot for additional structure and durability. Rigged on the recommended Team Edition 430cm RDM mast, it sets with a significant amount of luff curve compared to others in the group; with only the cross batten (second from bottom) retaining rotation around the mast. At rest there’s shape below the boom, yet relatively little above, the leech twisting off progressively along its length. Build and materials used are well thought out, with a large Velcro opening on the tack fairing to expose the roller and other practical touches such as abrasion beading stretching the entire length of the bottom two battens.

BRAND CLAIM
“Superb low-end ‘lungs’ have made the Oxygen famous for it’s low-end effectiveness. Now it’s the top end that the 2017’s shape definition has enriched. Outright speed, stability and efficient handling for long, satisfying sessions are what make the Oxygen so popular and such a threat to it’s camber-induced rivals.”

PERFORMANCE
Despite possessing the lowest quoted area in the test, the Oxygen produces an impressive amount of bottom end grunt by combining its minimum setting with the top clew eyelet. As a gust hits, the movement in the luff tube allows the sail to adopt a much deeper profile, the long boom length providing the leverage to impart obvious useable feedback through the backhand. Accelerating smoothly, the Oxygen quickly adopts a comfortable committed stance, feeling balanced in both hands. It has an easy forgiving freeride nature, its power delivery soft and fluid rather than sharp or immediate and yet when you compare your speed to your peers, you realise that the Oxygen also has a surprising turn of speed. It comes easy, without much input or focus from the rider, quickly inspiring you to explore its true potential. As the wind strengthens, the Oxygen can be re-tuned with more downhaul for improved twist, with the boom’s tailpiece fixed on the lower clew eyelet. The stability is unwavering, as you’d expect from a Loftsails, the predominant use of tubed battens no doubt playing their part. And yet despite a more locked-in stance, the foil retains its softer power delivery, making it accessible to the progressing rider and encouraging for the experienced to keep pushing into increasingly severe conditions. Its stability and ease permits you to sail longer and push your boundaries, whether trying a new transition or scrutinising your top end limits.

THE VERDICT
Whilst an authority in a freerace blasting role, the Oxygen also has a lighter side. With a soft accessible power delivery and a wide wind range, it doesn’t always take itself so seriously, giving it masses of user appeal.