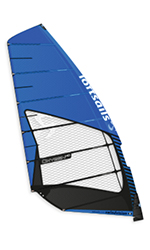 OVERVIEW
The Oxygen has been a great success story for Loftsails since its introduction in 2000 (then dubbed the O2) and is perfectly suited for this test, being branded as their no-cam freerace contender. A new option for 2018 is the inclusion of a blue HD version, such as the one here, or you can opt for the standard orange model, with monofilm used in the window and upper panels. Tube battens are used extensively in both versions, housed inside alternating x-ply batten pockets, allowing them to be more centred in the sail, thereby mitigating any inconsistency in the sail’s profile between tacks. With plenty of sail area up high, and one of the longest boom lengths in the group, the Oxygen has a boxy outline, the second lowest batten crossing over the boom to extend the leech. In doing so, the idea is to help connect the boom to the sail’s structural form, whilst enabling the leech to twist more dynamically. Rigged here on a Team Edition SDM mast, there is plenty of luff curve in the Oxygen once set, with only the crossover batten retaining rotation around the mast. At rest, the profile of the sail is relatively shallow, the shape placed low and far back, whilst remaining neutral above the boom. The leech is loosest in its mid-section, with the option of using two clew eyelets according to the conditions and riding preference. It is a well thought out sail and includes neat little touches, such as a large Dacron head panel for easy rolling and a long Velcro opening on the moulded tack fairing.

BRAND CLAIM
“Experience our Oxygen to know what true freeride is about. Deep design pedigree accessible slalom performance … the Oxygen is alive.”

PERFORMANCE
With its relatively flat profile at rest, the Oxygen is neutral and easy in the hands initially, so the bottom end punch that it develops comes as a surprise when you begin to pump it in a gust. This is largely down to a combination of the stretch in the luff sleeve enabling the Oxygen to swell significantly, adopting a much more useful profile, plus the length of the boom (one of the longest here) providing plenty of feedback through the back hand. Settling into a comfortable locked in stance, the centre of effort is low and focussed around the rider, feeling balanced and easy in the hands. The acceleration is tangible as every gust hits, the Oxygen pulling positively and seeming to almost lose its weight as it surges forward, becoming ever lighter to touch. This efficiency can’t help but inspire, encouraging the rider to centre their stance and hunt for the next gust. This lightness and speed means the Oxygen can be thrown into transitions almost recklessly, knowing that it will become neutral mid-turn and be easy to reposition. Its long boom means the rotation is perhaps a little slower than some, yet the power returns smoothly, its low rider-focussed position, serving little cause for concern, even in violent seas. As the wind increases, simply changing down to the lower clew eyelet helps to orientate the boom with more rake and ease the sail into a more compact posture. You can play the downhaul and outhaul more to vary the extent of the power delivered, yet we were impressed with the Oxygen’s range on one setting, giving it a very practical, plug and play nature.

THE VERDICT
Unique in style and set, the Oxygen combines balanced easy handling with range and real efficiency, making its performance both accessible and far-reaching.