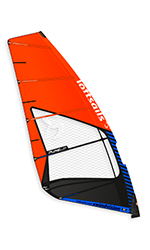 OVERVIEW
The Purelip is Loftsails longstanding ‘hardcore wave’ sail, designed to provide the strength and stability within its 5-batten layout to withstand all that the most volatile conditions can throw at it. There are twelve sails in the range, from 3.0m to 6.2m, each using the brand’s unique ‘Standing Battens’ with their ability to force the desired profile and ensure top end stability. Sail designer Monty Spindler describes these rectangular cross-sectioned rod battens as “tube battens for waves”, making them stiff in the rear section, yet still capable of taking a pounding in the surf. The rest of the sail is no less considered, with their tried and tested Integrated Panel Concept (IPC) used, the window panel overlapping the lower panel and leech panel to provide strength and integrity. X-ply is then used throughout the Purelip’s panels, from a 5mil triax laminate perimeter, to a 4mil window panel and coloured 3.5mil biax scrim in the upper panels. Even the head panel is thought out, opting for Dacron to ensure durability and ease of rolling. Rigged on a 100% Team Edition mast, this 5.7m sets relatively flat, the two lower battens just touching the mast whilst the leech displays plenty of progressive looseness along its length. There is also lots of luff curve in the leading edge of the sail (one of the most in the group), providing a high skin tension throughout the Purelip’s panels.

BRAND CLAIM
“Premium balance & stability in challenging conditions is what the Purelip is all about. Playing in the waves is demanding, both for you and your gear. The number one priority of the Purelip is to be able to handle brutal poundings in breaking surf, followed by rig stability in varying winds associated with wavesailing.”

PERFORMANCE
With such a shallow profile at rest, the Purelip is incredibly easy and balanced initially, whilst off the plane. As a gust hits, the excess material in the luff sleeve allows the sail to breathe into a deeper profile, the draft quickly expanding to its elastic limit. In doing so, the Purelip instantly generates a good amount of punch and bottom end drive, the immediacy of the response tempered by the stretch inherent in the thinnest sliver of Dacron in the luff panel. It’s an impressive mix of power and response, yet ease – the sail working around the rider and allowing them to adopt the stance and riding style of their choice. It provides all the manageable power when you need it, yet goes light and neutral when sheeted out, making for easy manoeuvres through transitions. And with its high cut foot, it can be committed into the tightest turn or in the most challenging seas. With excellent range on one setting, its secret alter-ego is discovered when using the Purelip in powered to overpowered conditions. Opt for the lower clew eyelet; pull on a few extra centimetres of downhaul and outhaul and the sail becomes a supreme high-end machine, with unwavering stability. The centre of effort is locked forward in the draft, focussed around shoulder height to give that feedback and response. You may well argue that in these conditions, you’d be changing down from a 5.7m anyway and we would tend to agree. But we’ve all been caught out on those days (particularly in the UK) when the conditions are so variable that you could literally go through your whole quiver in an afternoon. So it is comforting to know that your sail has such a wide tuneable range … and the Purelip almost redefines what is possible in the top-end!

THE VERDICT
With looks that deceive, the Purelip provides precise useable power over a massive tuneable and natural range, displaying just the right balance of comfort and sharpness that can’t but help to inspire. Its top end stability is something to marvel.