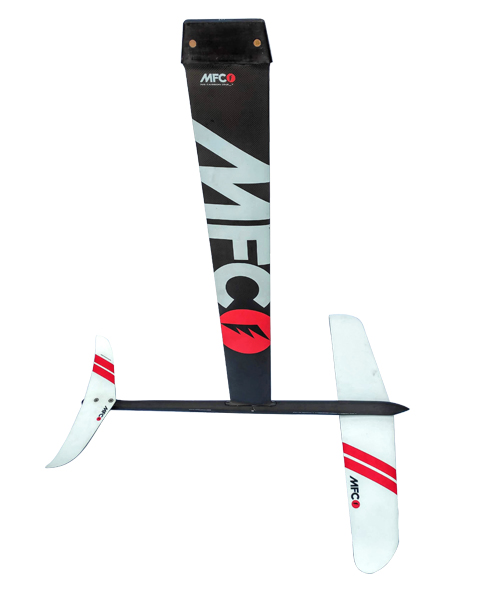 THEY SAY
MFC One7 Hydrofoil is our first all carbon windsurfing hydrofoil. This hydrofoil starts flying with only 6 to 8 knots of wind. It is suggested for comfortable and easy riding and it allows you to interchange front and back wings with our racing wings setup.

WE SAY
The MFC didn’t quite make it for our test last year, so it was good to grab the opportunity to try it this year. Pulling the components out of the padded bag, we were impressed with just how cleanly and easily the One7 goes together, the precision in its fabrication certainly noticeable. Produced in the Cobra factory, using a combination of carbon composites and resin transfer moulding technology, it uses Sicomin G33 BioEpoxy resin – an environmentally enhanced green epoxy derived from natural origins. It is a stunning looking bit of kit, the large carbon mast a real work of art, whilst the white finish on the top surface of the Freeride wings can’t help but draw the eye. Shims are supplied to be able to fine-tune the pitch of the flight; excluding them from the party initially leaves the foil in a neutral position – a good starting point from which to adjust according to kit and preference. The mast is easily the tallest on test this season, and as such requires a board with a fair bit of width in the tail. The Tabou Air Ride or JP HYDROFOIL 120 we tested this year were suitable, although we also had a few extra boards in the centre with which to partner the foil. We also had the opportunity to try the MFC with its carbon Racing Pro setup – a high aspect 78 cm front wing and 38 cm stabiliser wing. Used in light airs with large sails, the MFC can be pumped purposefully to provide early lift. The lift is balanced through both feet and comes on smoothly, making it easy to work through an effective pumping technique, using the full length of the mast. Accelerating gently to a comfortable cruising speed, the One7 Freeride reaches effortlessly across the wind, its extra mast height again playing its part to keep the board clear of any undue touchdowns on wave crests. It is a good tutor for the progressing rider, providing the ease and manners for first flights, as well as the tempered response to understand height control, and the various stages during transition. As the wind increases we naturally found ourselves wanting to push the Freeride Pro to explore its potential, which is where we found its Freeride wings wanting somewhat. The front wing isn’t designed for high-end performance and trying to force it into this role seems to provoke some instability and kick back. We’re not 100% certain where the twitch manifests from, but we suspect it comes from some flex in the front wing. Instead, a revisit to shore and a change for the Racing Pro wings soon restores the confidence to push. With a chord of just 11 cm, the Racing Pro setup is certainly high-aspect in outline and requires some rider input to really exploit in marginal winds. Yet deliver power and the new setup certainly obliges. Fast on every point of sail, it feels crisp in nature and response, the shorter span of the tail wing combining with the fuselage length, providing the ability to change ride height and board trim quickly. We tried the foil with several boards and found the use of the supplied shims incredibly useful, helping to adjust riding trim to account for various setups. Compared to some of the latest thoroughbred foils, the MFC isn’t necessarily going to win top fleet races, yet its stability and manners allow to rider to load it and cover distance with confidence. In transition, in Freeride Pro guise, the MFC is less critical during transition and provides the extra time, stability and forgiveness to achieve full flight through the turn. It still requires more rider input and awareness than many low aspect foils available, yet encourages a better understanding from the rider. The One7 Racing Pro needs to enter and maintain speed throughout the turn to really excel, its front wing stalling and dropping the instant its angle becomes too critical. For those that possess foiling experience and like a challenge, it is certainly an excellent way refine your technique, rewarding those accomplished with plenty of speed on exit. Overall, the MFC One7 is a fine tutor for the uninitiated right up to the ambitious freerace foiler, with the potential to adapt and cater for different rider abilities through the use of the two wing setups.