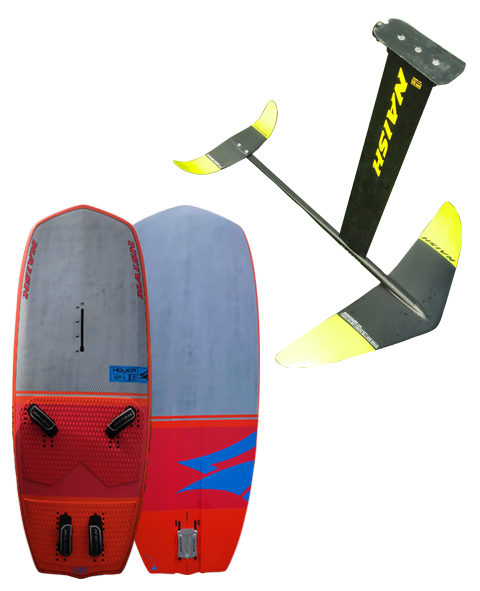 THEY SAY
FOIL – The 2020 Windsurf Foil Set 1150 takes windsurf foiling to a new level. With foil racing developing into a very high-end corner market, not viable for non-racing, we’ve created a foil set that closes the gap from first time foiling to performance freerace foiling.

BOARD – Aiming to decrease as much swing weight in a windsurf foilboard as possible, the all new Micro Hover is our shortest foilboard yet, while still maintaining the necessary length and volume to get on a foil, tack and gybe.

WE SAY
The Hover Mini and Windsurf 1150 are both new releases for 2020, building upon Naish’s stated philosophy of producing user-friendly foiling equipment for the freeride/freerace sector. The focus is for the board-foil combination to perform in the lightest possible winds, with relatively small sails and on reaches rather than solely an upwind-downwind flight path. Sitting next to the multi-sport Freemove Foil Jet 1050, the 1150 is targeted squarely for windsurfing, its front wing an evolution of its predecessor, retaining the delta wing outline, yet possessing a higher aspect ratio, with a shorter chord and longer wing span. The mast has been increased by 5 cm whilst the fuselage has been extended significantly, for improved flight stability. The foil fixes to the board using the brand’s unique Abracadabra Plate, incorporating a separate base plate that fixes into the board’s US boxes before the foil is slid into place and located using a thumb-screw. It is a great idea and really helps to make fine-tuning and transport practical. The Micro Hover is targeted by Naish for windfoilers that “are looking to step up their performance”, and sits neatly in their range between the conventional Hovers, stuffing a quoted 131 litres into its wide compact plan shape. Housing inboard and outboard strap positions, it is said to cater for different foils, winds strengths and riding styles, emphasised further by its extraordinary quoted sail range of 3.7-7.8m. Supplied with Naish’s own vario ergonomic straps, it is produced in S-glass sandwich full PVC wrap construction, and has a paint-free finish to reduce weight and mitigate unsightly scratches. Taking the combination onto the water for the first time, it is clear that the Micro Hover’s volume is very much focussed around the tail of the board. As such, the rider’s stance needs to be rearwards, requiring a more foil-centric method for maximising early planing potential. If you try to adopt conventional technique, using the board’s waterline and driving through the front foot, the short thin nose will soon show its displeasure and submarine. Instead, stand back and adopt the more modern process of working the foil; find the straps early and pump the board through the feet, akin to a surf-foiler. In doing so, you soon realise the benefit of the Micro’s short compact length, its reduced swing weight helping to provide connection and response through the foil. Once in flight the board feels crisp and lively underfoot, providing a direct connection with the foil. The deck is flat and even the outboard straps are relatively inboard, making them easy to locate, and encouraging the rider into a more upright stance over the board, the deckpads and straps providing safe secure feedback. From here, it is all about the foil and its character, the board becoming simply the vehicle in the relationship, conveying the foil’s personality. The new Windsurf 1150 foil is certainly a step forward from its predecessor. Stable at rest, it generates lift early and has an innate efficiency, accelerating smoothly to a good cruising speed, requiring little encouragement from the rider. Feeling loose and alert to changes in foot pressure, it hasn’t lost any of the signature Naish foil manoeuvre potential either, the small stabiliser wing neutralising the directional stability introduced by the longer fuselage. Gybing on this Naish combination is exciting and dynamic, the foil’s response inspiring you to drive in hard, whilst its stability mid-transition and constant lift even at low speeds help you to complete the turn in full flight. In stronger winds and choppy seas the Naish setup provides all the agility required to dance and pick your way through the path of least resistance. It’s as close to a wave riding sensation as you can have on flat water – a playful partner that seems to ask to be thrown around and delivers real fluidity in its rail-to-rail response. With the strap positions and the 75 cm mast supplied, the Naish setup remains manoeuvre focussed. When used in heavier seas or even loading the foil to explore its performance range, we managed to breach on occasion, which quickly gives you a healthy appreciation for the lack of volume in the Micro Hover’s nose once more! To remedy this, Naish offer both 85 cm and 95 cm extruded aluminium mast options as add-ons. Alternatively, make use of the setup’s wealth of tuning capabilities, through the excellent Abracadaba Plate concept, mastfoot and footstrap position. (Just check the thumb-screw on the Plate on occasion, as we’re sure ours worked itself loose after extended sessions.) Overall, the Naish is a well-thought out and innovative playmate, clearly displaying the brand’s passion for freeride foiling and the freedom it brings.