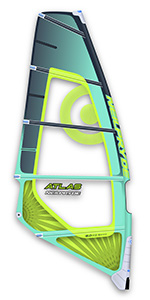 OVERVIEW
The Atlas has been totally reworked for 2016, with an emphasis on improving the handling without detracting from what the Atlas is fundamentally designed as – the brand’s power wave sail. They claim this has been achieved by refining the luff-curve, which enables better twist in the lower and middle leech, thereby preventing it from becoming backhanded. Any power loss has then been countered by increasing the sail’s profile in the lower panels. Rigging on a 400cm RDM mast, it certainly sets with plenty of depth to the draft in the bottom two battens. Easy to fine-tune the outhaul according to the downhaul, it sets in a conventional manner, with looseness in the top panel and a fair amount of play in the luff tube. There are also some welcome little innovations, such as a clip on the end of the tack roller pulley to hold the downhaul rope before stowing the rest in a mesh pocket sewn into the tack fairing.

BRAND CLAIM
“Atlas offers predictable, steady and user friendly drive, ideal for use in onshore wave conditions. Early to plane, the Atlas is up and ready to get into the action with efficient, usable power at all times. Featuring great upwind ability and acceleration, the Atlas pushes hard when conditions are less than ideal and its high lift characteristics ensure massive jumping performance.”

PERFORMANCE
On the water, the Atlas has lost none of its power or direct feeling in its new guise, which is impressive considering it now sets on a shorter, softer mast. Crisp and balanced in the hands at idle, the movement in the luff tube allows the sail to breathe into an even deeper profile as the wind fills, the centre of effort placed low in the draft to offer plenty of positive bottom end grunt. There is an elastic limit to this stretch and once achieved, it means the sail delivers a crisp precise style of power that can be used to great effect. The mid-leech in the sail remains quite taught when rigged, helping to provide the more direct feel and sharp response. Its delivery has become much more focussed and balanced than we recall of previous Atlas incarnations, which in turn gives the sail much more user appeal, across rider weights and abilities. And despite the mid-leech being relatively tight compared to the upper panel, the sail twists beautifully in harsh gusts or stronger conditions, keeping the centre of effort locked forward in place. Its assured dependable handling can’t help but instil confidence in the rider that the sail is backing you and will provide the minerals if the conditions become increasingly demanding.

THE VERDICT
With significant improvements to its handling, new life has been breathed into the Atlas for 2016 and with it comes a much wider user appeal. Crisp, direct and dependable power on tap, particularly useful in gusty conditions or challenging cross-on environments.