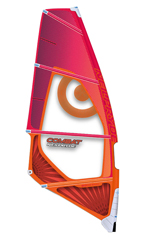 OVERVIEW
Last season, we tested the 4.7m on both 370cm and 400cm masts, preferring the longer stick for more bottom end drive and its improved profile stability. So it is interesting that the 2017 Combat is designed exclusively around use on the 370cm mast. Remaining in the Neil Pryde line up as their ‘All Around Wave’ sail – the choice for ‘uncompromised performance’ and ‘versatility’ – it comes in two construction options, the Heavy Duty (HD) version using x-ply scrim throughout its panels in green and yellow, or the standard version here in red and orange with its monofilm window. Quality of set and attention to detail (such as a downhaul clip incorporated into the tack roller) are as we have come to expect from the NP loft.

BRAND CLAIM
“The 2017 Combat has a more compact outline with a shorter luff and a reduction in the overall luff curve. The luff curve was reduced in order to improve sail twist making it much easier to handle in gusts and when turning on top of the wave. Since there is less luff curve in the sail (resulting in reduced body tension) we increased seam shaping in the bottom two battens in order to retain early planing performance the Combat is known for.”

PERFORMANCE
Easy to downhaul thanks to the use of a 370cm mast, the Combat sets in a familiar fashion. The leech falls away progressively along its length to the step at batten #3, whilst the bottom two battens retain plenty of rotation, protruding beyond the leading edge of the mast before outhaul tension is applied. There is plenty of tuning range available, the Combat displaying depth and shape low down in its profile throughout. On the water, this translated to plenty of low down drive – impressive for a sail set on a 370cm. The centre of effort seems lower than we recall of its predecessor, focussed around the rider and providing balanced useable feedback through both hands. Its power is super dependable – a real godsend for getting out of tight spots in challenging conditions. And as the wind increases, its delivery can be refined through tuning to provide the amount of torque required. Fast and efficient through the air, it has impressive stability for a four batten sail at the top end of its wind range, allowing the rider to stand up and ease out for a moment’s breath if desired. In manoeuvres, the Combat doesn’t go as neutral in the hands as some here, yet remains manageable and comfortable throughout, the rider always aware of where the power is coming from and able to use it for expressive slashes and projections. There’s a real quality to the feel of the Combat, as if it is always on your side, allowing you to focus on your own performance and that of the board.

THE VERDICT
The Combat exudes quality in both its features, set and performance, providing dependable and efficient power across an impressive tuneable range.