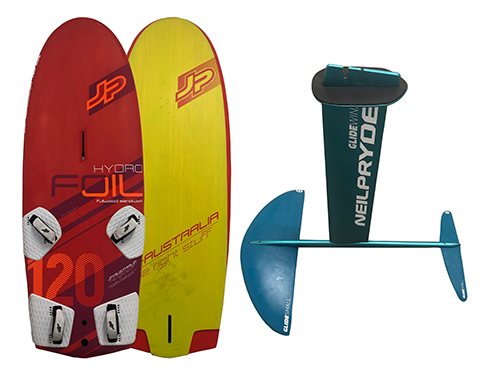 THEY SAY
Glide Wind is our foil for easy cruising and carving, as well as for small waves and freestyle. With an early take off it flies at low speed, allowing first time foilers to feel safe and comfortable. This all-round foil is very stable, and even allows you to zig-zag around while foiling. JP Hydrofoil 120: These medium to strong wind hulls are based on Werner Gnigler’s experience of two generations of all-round and light wind performance foil boards. According to their use in stronger winds, they are designed with control in mind.

WE SAY
Two new designs for the 2019 season, Neil Pryde’s foil range and JP’s Hydrofoil board series have both been expanded significantly to meet the discipline’s ever expanding diversity. The Glide Wind sits alongside the now pre-preg carbon winged Flight AL, and has several unique features within this test group. Supplied with a Powerbox head fitting (requiring an 8 mm fin bolt, so be prepared to widen the hole of your box), it has a short mast and fuselage length and narrow front wingspan – all indicators of a leaning towards boards with narrower tail widths. The JP 120 is part of a whopping six board lineup, ranging from 105 -190 litres, and is available in three construction options. It has to be noted that the board and foil combined worked fine within a certain wind range, but both benefitted from setup alterations to match tail width and mast length, and fully understand their potentials. The head fitting supplied with the Glide Wind is Powerbox, for the very reason that it’s designed to be used with narrower, more manoeuvre-oriented freemove, freewave or even freestyle boards. The issue however, is that a conventional Powerbox isn’t designed to be used with a foil. You can, by all means, do so … but if there’s a failure, your board brand is unlikely to honour a warranty claim. JP themselves have stated as much on their site. Salvation is just around the corner though – we have news that for 2020, JP will be offering an exclusive foil-approved Powerbox in their Pro Edition Magic Rides and Freestyle boards. For now though, we easily switched the head of the foil for a Deep Tuttle box, allowing the foil to be used with the predominant head fitting in wind foiling. Used in the JP 120 in marginal winds, and partnered with a 6.5m sail, the Glide Wind accelerates smoothly, and feels willing to lift early underfoot. The width in the tail of the 120 almost overpowers the foil as you step back however, forcing it back down to the water’s surface unless speed is maintained. So, opting to put the Glide Wind into a narrower tail (we tried various boards, including a JP SuperRide 116), the foil’s influence is restored. It lifts early and progressively, feeling very steady and passive, as it maintains height at low speeds. With a upright, cruising stance over the board, the manoeuvre potential of the Glide Wind can really be appreciated and explored, providing crisp response to foot steering. Certainly one of the easiest to carve tightly both upwind and downwind, it would be a great option for the manoeuvre oriented sailor, looking for a foil to rejuvenate those marginal days in typical coastal conditions. The 70 cm mast does require concentration when used in heavy seas and is not really one to be loaded or pushed hard, preferring a more dynamic sailing style for quick switches between speed and direction. This becomes very apparent in the gybe, where the Glide Wind provides a lovely balance of easy lift, stability and response to get through full flight gybes at will. Partnering the JP 120 with an 85 cm plus masted foil, you soon appreciate the extra width, helping you to load the foil and really push its performance. With the footstraps in their outboard position, the width helps you to canter the board over to windward and charge around the bay in what is best described as freerace foiling mode. Short and compact underfoot, it is also crisp and responsive in transition, the wider tail meaning you need to step over a little more, its leverage requiring a deft touch so as to not deviate from a smooth carving path. For a more relaxed riding style, the change to the inset footstrap positions makes a significant difference, tempering the board’s immediacy in response and allowing the rider to adopt a more relaxed upright posture.