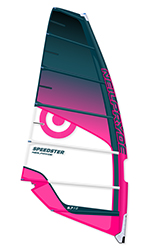 OVERVIEW
The Speedster is new to the Pryde lineup for 2018, taking the place of the long-standing and much loved Hellcat. With the new name comes a new design direction, making the Speedster much more compact than its predecessor. That said, the inspiration for their “freeride sport” sail remains the brand’s reputed RS:RACING programme, with World Champ Antoine Albeau spearheading development. The angle of the Speedster’s battens has been raised for example, to adopt the EVOX’s ‘Airflow’ batten layout. Other features include the brand’s new integrated batten pockets, for more symmetry between tacks; tubular battens in all bar the foot batten, for reduced weight and improved stability, and a custom laminated clew with internal Kevlar strands, for best strength and load distribution. Rigged here on the brand’s premium TPX100 SDM mast, the Speedster certainly looks pretty in pink, with depth to its profile low and forward in the draft. And whilst its luff length is average for this group, its boom length is relatively short, which combines with the upper panels tapering down to a narrow head shape, to give the Speedster a visually compact outline. Fully downhauled, the 6.7m retains some rotation in its bottom two battens, whilst the third one up sits clear of the mast, the leech twisting off smoothly all the way down its length.

BRAND CLAIM
“Compact sail with shorter boom and shorter mast for great balance and light feeling during manoeuvres. The high angled battens combined with pre-twisted shaping allows the sail to open, ready to accelerate in a fraction of a second, converting any gust into instant energy.”

PERFORMANCE
Whereas the Hellcat felt large for its size, the Speedster certainly feels compact from the off. So it came as somewhat of a revelation when it powers early and generates useable bottom end power. That said, it is more precise and defined than bold and obvious, requiring a subtle approach from the rider to really make the most of the energy available. This is also apparent in pumping, where the Speedster responds superbly to good technique. Once going, it settles easily into a powerful stance, the mast upright and driving forwards at all times. The centre of effort is locked forwards and relatively high in the draft, yet its stability and precision make the power useable rather than overbearing. The movement in the luff sleeve provides enough elasticity to cushion the delivery, and the Speedster feels incredibly slippery through the air, accelerating in every gust, whilst remaining light and alive in the hands. This precision means the rider can depend on the sail, always knowing where the pull will come from and enabling them to concentrate on the board’s trim and the path they take across the water. It certainly needs to be partnered with an efficient board that can keep up with it – it will overpower and overtake more placid natured freeride boards, creating control issues as it pulls the rider’s stance out of shape. In transition, the Speedster powers in with intent, its short boom length making it feel small and manageable throughout. Rotating between tacks quickly, the battens snap round onto the new tack with quite a force, given the sail’s solid profile, so be prepared to drop your weight to counter the power returning quickly.

THE VERDICT
Providing a quality of performance to match its striking appearance, the Speedster is a class act, marrying slippery efficiency with crisp handling to be a genuine contender on the racecourse.