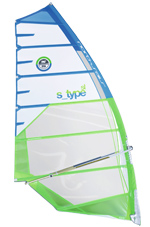 OVERVIEW
North Sails have been striving for years to make windsurfing rigs more user-friendly and practical, through innovations such as the XT extension and designing all sizes of a sail model specifically around one mast size. The S_Type SL continues in this vain, with all its sizes from 6.0 to 8.8m capable of being rigged on a 460cm mast. Refinements for 2016 include a reported increase in the upper luff’s profile for improved early planing and acceleration, along with extra depth to the profile below the boom for maximum planing power. There’s also what North are calling their 2nd generation Aero Sleeve design, being wider low down for improved performance and narrowing further up the sail for waterstarting ease. Rigged on a Platinum 460cm mast, the Hyper.Cam once again proved effortless to install, rolling onto the mast once the right tension had been applied. Once set, the S_Type SL is an attractive looking sail, with shape locked low and forward in its draft and plenty of looseness radiating down its leech to the 5th batten.

BRAND CLAIM
“Kai Hopf has thrown everything into the mix, resulting in even more performance without having a negative effect on the handling. The decisive factor is the NO.COMPROMISE.DESIGN that he translated directly from the WARP F2016 into the S_TYPE SL. Thanks to reinforcements around the leading edge, the known draft stability and the broad wind range could be retained. The result is a highly sporty and competitive slalom sail that thirsts for speed, yet is easy to tame.”

PERFORMANCE
On the water the S_Type SL provides easy accessible performance over an excellent natural range on one setting, with the extra trump card of tuning range to extend its appeal further. Set on its minimum downhaul, it generates an impressive amount of bottom end grunt to unstick the most stubborn platform. The power delivery is soft and smooth, with the power focussed far forward in the draft, making it effortlessly manageable. With only a moderate luff curve, there is also some flexibility in the sail, making it responsive to pumping as well as comfortable and balanced in the hands. For the average/light weight rider, extending the downhaul to its maximum setting detracted little from its light wind potential, the S_Type SL retaining plenty of shape and drive. The advantage to the extra tension was noticed as the wind increased however, the sail seeming to pass through the air more efficiently, accelerating more keenly in the gusts and gliding through lulls. In extreme winds, the S_Type’s stability can be settled with small amounts of positive outhaul, helping to flatten the sail without killing the forward drive. In transition, the Hyper.Cam remains one of the best on the market – rotating positively yet smoothly, without pulling the rider’s stance out of shape. The bottom cam on the S_Type SL is referred to as their Switch.Cam, capable of being taken out to improve the sail’s handling. We did try this during the test, but would argue that the S_Type’s handling is already so focussed and balanced as a 3-cam that most would happily keep three to benefit from the extra performance on tap.

THE VERDICT
The S_Type continues to impress, with a tuning dimension that extends an already extraordinary natural wind range. It is as hassle free as a cammed sail gets – easy to rig and set, with effortless performance and exemplary handling.