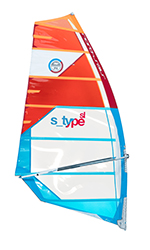 OVERVIEW
The S_Type SL is one step down from the brand’s highly successful WARP racing programme and evolves with many of the developments, materials and technologies tested on the World Tour stage. So much so, that North’s chief tester Marco Lang claims, “The only major difference between the S_Type SL and the Warp F2018 is that it starts slowing down if you sheet out, which makes gybing a lot easier if you are not on a pro rider level.” High praise indeed! For 2018 the S_Type SL sees little change from last season, adopting the brand’s ‘No Compromise Design’ using a resistive stretching material in the sail’s chord to extend stability. Then there’s the Aero Sleeve Design 2.0, using a wider sleeve low down to house the cams and improve air flow, before narrowing higher up for ease and practicality. The ‘Luff Lift Panel’ concept is also in place, increasing profile depth higher up the sail to improve bottom end drive and a more flighty feel. North’s exemplary Hypercams are not surprisingly still present, making rigging a pleasure. In fact, other than a slight visual change to the sail’s graphic and colour in the upper panels, the only other change we can identify is the use of iRocket 2.0 batten tensioners with pre-calibrated tension for 2018. This means that all battens are tensioned in the factory to an optimum specified amount and don’t need to be altered by you, the rider. One other real plus to the S_Type SL is that the whole range, from 6.0m to 9.3m can be rigged and sailed on a 460cm mast – impressive.

BRAND CLAIM
“The decisive factor is the NO.COMPROMISE.DESIGN that [Kai Hopf] translated directly from the WARP F2018 into the S_TYPE SL. Thanks to reinforcements around the leading edge, the known draft stability and the broad wind range could be retained. The result is a highly sporty and competitive slalom sail that thirsts for speed, yet is easy to tame.”

PERFORMANCE
Rigged on a Platinum mast, the S_Type SL is one of the easier sails to downhaul and set in the group, despite possessing one of the most pronounced luff curves. The iBumper moulded tack fairing is reassuringly stiff to fold back and expose the strap-free tack and roller pulley, whilst the visual trimming aids are as useful as ever, and the cams simply a thing to marvel, rolling smoothly onto the mast once the right tension is applied. At rest, the sail has a distinctly boxy outline, with a long top-batten and boom length, resulting in plenty of sail area above the boom. The profile is locked well forward in the draft, whilst the leech twists off progressively along its length. On the water this translates to a considerable amount of bottom end power. It feels large in the hands, more akin to an 8.5m rather than 7.8m, the feedback grunty and obvious through the back hand, yet soft and manageable, allowing the rider to lock the sail down and channel its forces into the board. Gathering pace smoothly and progressively, it always feels its size yet becomes incredibly comfortable and balanced as it reaches cruising speed, the centre of effort focussed around the rider. The surprise comes when a gust hits and the S_Type lifts and accelerates to greater speeds – it almost does it stealthily, the rider unaware of their enhanced velocity until they start charging past their peers! Fast on every point of sail, it requires no rider input – just keep the sail anchored in and enjoy the ride! In transition, there is no hiding the S_Type’s elongated boom length, the sail rotating slowly before the Hypercams demonstrate why they’re some of the best on the market. And with such obvious feedback through the back hand, the S_Type does require a re-tune when the wind increases in order to really appreciate its range. We downhauled beyond the maximum point to explore its limit and it kept its manners long after we thought it would protest.

THE VERDICT
A stunning engine for giant-slalom drag racing, the S_Type is a blasting exemplar, its range, efficiency and straight-line comfort justifying its inflated size in manoeuvres.