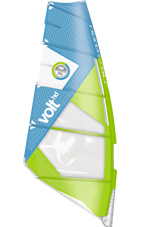 OVERVIEW
In this size the Volt has been completely reworked for 2016, with more luff curve and the centre of effort moved back in the sail around the rider. Easy to rig and tune thanks to North’s well established and very useful visual trimming aids, on its minimum setting the Volt displays a great deal of spring and play to its draft, the bottom two battens sitting flush to the leading edge of the mast. It only takes a fraction more downhaul to reach the sail’s maximum setting, although there is plenty of fine-tuning range in the outhaul to settle the draft and keep it locked in place.

BRAND CLAIM
“Since its introduction the VOLT has established itself as THE Freestyle Wave sail and the ideal partner for classic single fin boards! The fourth generation of the 5 batten bestseller convinces with extremely high draft stability and a very wide wind range, especially in overpowered conditions.”

PERFORMANCE
Light and neutral in the hands at idle, as soon as it is pulled in, it generates clean and focused power; the centre of effort situated quite far back in the foil. It feels firmer and more positive in the hands than we recall of the 5.9 Volt last year, with a more crisp and precise delivery. Bottom end power is transferred efficiently into drive to punch a board free from the water, the Volt adopting an upright manoeuvre-oriented stance rather than locked-in posture. And despite its considerable loose leech and large head area, the Volt feels surprisingly compact in the hands, the drive disappearing instantly as soon as it is eased out and without losing its manners. Even as the wind increases, the Volt seems to have little issue coping with the extra power, with the stability locked in place, which is impressive considering how far back it is in the draft. That is not to say the Volt is transformed into a blasting performer – partner it with an efficient freerace board and it begins to feel out of place. Instead, the Volt is a manoeuvre-biased all-rounder, happy to cruise around in comfort or being used in a coastal bump and jump role. It could also fit into a wave rider’s quiver as their largest sail to make the most of the lightest airs, confident that it would retain its manners should the wind increase suddenly.

THE VERDICT
The 2016 Volt 5.9 boasts improved handling and top end control without losing its sparkle or power for marginal winds. A manoeuvre specialist engine, it would not be out of place in a wave rider’s quiver, just as it would find favour with occasional freestylers or recreational freeriders.