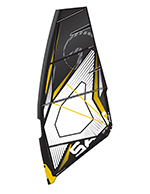 OVERVIEW
The Salt has evolved through constant development since its inception, and is now the prized sail of Ricardo Campello – one of the most flamboyant sailors that you can’t help but watch and admire. Becoming the Salt Pro for 2018, the focus was to increase comfort, lightness and control for when the conditions become volatile, particularly in the sail’s smaller sizes. The most obvious sign of this design direction is the inclusion of a large Dacron luff panel, stemming all the way from batten one to four. X-ply of varying specified thicknesses is then used throughout the rest of the panels, except for the small centre monofilm window. With two clew eyelets (the top one suggested for all but the lightest rider), a stepped leech at the main batten and x-ply batten pockets, the Salt looks every bit the modern wave sail and was tested here on the recommended C80 RDM mast.

PERFORMANCE
Rigging to the increments provided, the Salt Pro sets with lots of luff curve to provide masses of skin tension yet a relatively tight leech. The battens maintain contact and rotation with the mast, whilst the draft displays shape low down in the profile. On the water this translates to plenty of useable bottom end grunt, the large luff panel expanding to significantly increase the depth of the draft. The delivery is soft and forgiving, and comes through both hands, the centre of effort focussed around the rider. In marginal gusty winds, the movement in the luff panel meant the force of the pull varied – a trait that was particularly noticeable in lulls when the depth of the draft retracted. On the plus side, this gave the Salt a fantastic on-off nature, which really came into its own in transition. The true allure of the Salt though is in its ability to adapt. It was well liked when rigged on minimum set, yet really found most favour amongst the team when re-tuned with significantly more downhaul, opening the leech up progressively along its length. Used in properly powered conditions, it was transformed into a power-hungry animal, locked in and dancing over the water as it advances in every gust. It moves smoothly around the rider thanks to the softness in the luff panel, enabling them to keep the pedal down in attack mode, even in the most uninviting conditions. With speed comes light handling, which combined with the Salt’s on-off capacity when eased out, makes it a formidable weapon on the wave and in transition. The lower eyelet was a fail safe when the conditions reached beyond severe and helped to delay the sail’s structural decay a bit longer, by letting the leech twist that bit more.

THE VERDICT
Fast, agile and supremely comfortable to use, the Salt Pro’s soft delivery style makes its spirited, rearward and rider-focussed power both useable and stable across a far-reaching tuneable range.