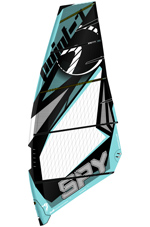 OVERVIEW
The Spy sits in the Point-7 range as their power wave sail. Rigged on a 100% RDM mast, it has the most luff curve in the group, providing ample skin tension and real shape low and forward in its draft. On its minimum setting the pronounced profile is complimented with plenty of movement in its large Dacron luff panel and luff tube, its structure maintained by the bottom battens pushing forward to sit flush with the mast’s leading edge. Even on maximum setting the Spy displays plenty of shape, the bottom batten retaining plenty of rotation as the leech falls away significantly.

BRAND CLAIM
“A powerful masterpiece and a symbol of control. Using a rich forward positioned profile for great drive, mixed with good skin tension, the SPY is a powerful yet extremely controllable sail, which ensures you stay on top of things in the widest variety of conditions and range of winds. Undoubtedly the right choice for many and most. Power is nothing without control!”

PERFORMANCE
On the water the Spy was the surprise of the show, with an ideal blend of measured power and balanced handling that found favour with all who used it. There is a great deal of shape locked low and forward in the draft, providing plenty of obvious bottom end power and drive. Delivering the energy efficiently to the board, the Spy remains balanced in the hands, its short boom length making it feel smaller than its quoted area. This dependable control remains a feature of the Spy throughout its wind range, allowing it to adapt effortlessly to any number of roles. From light wind wave sail, to high wind straight-line blaster; heavyweight’s power wave sail to intermediate’s tutor – the Spy displays the manners and practicality to cater for the demands of most. The key attribute is the Spy’s low focussed power position, which provides constant useable power without pulling the rider to their toes, yet helps to pin the board down in extreme conditions and retain control at all times. Its handling might not be as light or crisp as other sails with higher focal points, yet it is countered slightly with the shorter boom and it’s a small price to pay for the range of performance the Spy offers. If the wind becomes increasingly severe, the Spy can be retuned with more tension, increasing the twist in the leech without losing much shape in the draft. Classed by Point-7 as their Power Wave sail, it is, in our opinion, much more than that and would make a great ally for flat water blasting and bump and jump sailing, such is its dependable power, range and control.

THE VERDICT
Well made and eye catching, the Point 7 Spy is much more than its billing as a power wave sail would imply. Offering an abundance of power and practicality over a wide wind range, it is a true all-round contender and comes well recommended by us.