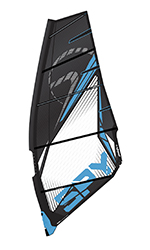 OVERVIEW
The Spy is Point-7’s “Onshore Beast”, designed for maximum power and drive to make the most of the lightest conditions. Developed with input from both their wave team (lead by Ricardo Campello) and world beating slalom team, the focus of the Spy was to mix a balance of speed, power and handling into the sail. Produced in x-ply laminates throughout its panels, the detailing of the sail is consistent with modern technology developments, including alternating integrated batten pockets and two clew eyelets, to other useful niceties such as a quick extension length guide on the lower batten and an integrated downhaul mesh pocket in the tack fairing. Rigged here on a C80 RDM mast, it sets with masses of shape low and forwards in the draft, which remains present even on the maximum setting. The lower two battens sit level with the leading edge of the mast at rest and the downhaul can be varied according to the conditions, the leech capable of falling away progressively down to the clew under increased tension.

BRAND CLAIM
“A powerful masterpiece and a symbol of control. Using a rich forward positioned profile for great drive mixed with good skin tension, the SPY is a powerful yet extremely controllable sail which ensures you stay on top of things in the widest variety of conditions and range of winds. Undoubtedly the right choice for many and most. Power is nothing without control!”

PERFORMANCE
With its high cut foot and short boom length, the Spy feels relatively small for its quoted size initially, but as the wind hits and the sail is powered, it is impressive the amount of bottom end grunt it has. Tuned for the lightest airs, it has a really pronounced curvature to its draft, both low and forward, which provides plenty of pull through both hands. There’s movement in the luff sleeve, which combined with the Spy’s narrow Dacron luff panel, provides a little sensitivity to what is otherwise a highly tensioned sail, helping to ease the power in as the sail accelerates in the hands. And as with many other Point-7’s we have tried in the recent past, the Spy is fast, efficiently translating the extra power from gusts into more speed. Whilst always balanced in the hands, as it gathers speed, the Spy feels lighter and lighter, helping to inspire the user to try new manoeuvres or drop into the next set of waves. It has an impressive all round nature, happily fulfilling diverse roles, from high wind blasting engine, to marginal wind powerhouse for the opportunist. It may not go as neutral in transition as some here, and nor is the power as progressive or forgiving as others, but its stability and appetite is never in question, and the more energy you put into the Point-7, the more performance it willingly returns.

THE VERDICT
Punchy and precise, the Spy delivers pedigree performance, willing to fulfil a number of different roles and thriving when used by the adventurous and pro-active.