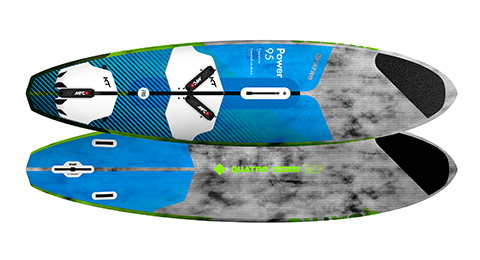 THE LOW-DOWN
The Power comes into the Quatro line-up in 2018 to take over from the Tetra. Three sizes are available, this 95L version being the middle sibling, with 10L separating each design in the series. It’s a chunky looking board, with full rails throughout its profile. Clean and uncomplicated in design, it has a short, wide and rounded outline, pulled in at the rear to finish with a diamond tail. Supplied with MFC thruster fins and quality straps to compliment its KT dual density deck pads, the rider’s stance is focussed around the centre-line, more akin to a wave-board than a coastal blaster. Produced in the brand’s ‘Pro Carbon S-Glass’ technology, the Power clearly has one foot in the wave-riding camp, but is it simply an overgrown wave board, or can it be put to task in other roles too? Time to put it to the test.

BRAND CLAIM
“A new three stage rocker concept with a nice flat between the stance and a small release off the tail is allowing this board to really feel free and glide strong and powerful. Again I went with a bump diamond tail to keep some area at one foot off the tail, but have a little less in the tail to allow the board to feel more free when turning. The more parallel outline lends itself to a super stable and quick ride”. Keith Teboul.

PERFORMANCE
Being the widest board here, the Power feels stable and dependable underfoot, capable of carrying a 6.0m sail with ease. It likes to be pushed off the wind to release swiftly, and accelerates readily to a comfortable cruising speed. Feeling compact and conventional underfoot, the Quatro provides a ride much like its visual appearance – clean and understated. It prompts the rider into an upright stance and remains controlled whatever the sea state, responding predictably to changes in foot pressure. There’s a light looseness to its character underfoot, feeling composed yet alert to the rider’s commands. The fins supplied provide enough traction for the board to track efficiently in a straight line, plus the drive to sail through lulls … and yet the Power doesn’t really react favourably if you try to push more energy into it. It reaches its top speed and simply won’t be pushed further, preferring a more varied and diverse style of sailing rather than powered flat water blasting. In carving transitions, the Power keeps its speed effortlessly, the rails gripping and anchoring the board to the water, whilst the looseness in the tail allows the radius to be tightened upon request. The extra width and volume in the tail also means the Power is incredibly user-friendly during the exit of the gybe, making it a good tutor for the nervous or progressing rider. Taken into the waves and you can almost hear the Quatro breathe a sigh of relief – the arena of its making. It has the response and control to easily pick its way through confused seas and a free nature that belies its 95L on the wave face.

THE VERDICT
Enjoyed by all who sailed it, the Power is in effect a large wave board with an extra dollop of inherent accessibility, giving it extra user appeal, particularly for those that want to fast track their progression into wave sailing.