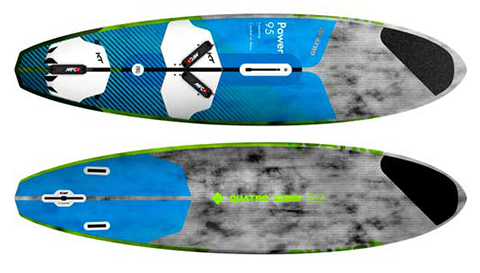 THE LOWDOWN
The Power range of three freewave thrusters remains the same for 2019, the 105 being the largest of the family. One of the widest yet shortest in this test group, it has quite a bulbous outline, with a rounded nose, parallel mid-section and stepped wingers right by the side fins, to finish in a pinched diamond tail. There’s plenty of volume packed into its compact shape giving it quite a chunky appearance, and despite possessing outboard strap options, there is no escaping the Power’s “wave-riding DNA”, the adhesive KT deckpads focussing the rider’s stance over the board’s centre-line. Produced in the same Pro Carbon S-glass construction lay-up as all other Quatro boards (and weighing in as one of the lightest here), the clean graphics of the Power are said to mirror its “unpretentious” nature, being simple and stylish. It comes supplied with MFC’s excellent straps, and a set of the brand’s thruster fins, the 23 cm US box central fin made in G10 whilst the side fins are resin transfer moulded (RTM).

BRAND CLAIM
“A new three stage rocker concept with a nice flat between the stance and a small release off the tail is allowing this board to really feel free and glide strong and powerful. Again I went with a bump diamond tail to keep some area at one foot off the tail, but have a little less in the tail to allow the board to feel more free when turning.” – Keith Teboul.

PERFORMANCE
As soon as you step on the Power, you can sense the wave-biased heritage that lies beneath its skin. Wide and floaty, it is incredibly stable at rest, making it easy to move back and locate the straps early. With some deft balancing, the light to medium weight rider can even remain in the straps whilst off the plane, such is its width and compact nature underfoot. To release, you simply stuff it off the wind and it accelerates smoothly, cruising to a comfortable, easy pace. The flat deck and inset fittings encourage the rider into an upright stance over the board, more manoeuvre-oriented than locked in and blasting. The ride is super relaxed and measured, its dependable cruising speed and quick response enabling you to pick your way through the most turbulent seas, as if blissfully unaware of the chaos around! The tail of the board is just so planted and engaged, providing real control without feeling too sticky. It is not a fast board (even when tried with a 30 cm single fin setup), yet it simply glides through lulls, its low planing threshold helping it to drift through when others would potentially falter and stall. The Power’s real character comes to the fore when used in a wave environment. Providing the composure and drive to push out through the breakers, it jumps onto the plane easily and tracks upwind well. On the wave face it is just so playful – you can really feel the grip provided through the tail, its steady dependable character providing the time to redirect through the tightest angle. Put simply, it is a great deal of fun to use, making transitioning through the most contorted stance easy, and ideal for exploiting small, tightly-packed waves. A light wind secret weapon, or large rider’s go to wave board, it is just so balanced and measured, providing the response and sweet carving to dance through the most challenging
coastal maelstrom.

THE VERDICT
Well mannered and controlled, the Power planes early to feel balanced and playful underfoot, with a level of grip and response through its tail to rival any large wave board, yet with
an ease that will flatter most.