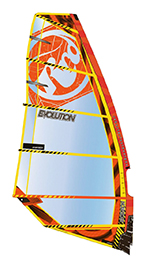 OVERVIEW
The Evolution has been in the RRD range since the brand ventured into the sail-making arena and retains its position as their designated freeride foil. The version tested here is the Mk8 released in 2016, with the 6.3m size reviewed last March (Issue 353). The latest version (Mk9) is due to be released very shortly, but for now we’ve included the 6.8m here for reference. Aimed to combine early planing with ease of use and control, the Mk8 saw its numbers swell in the key 6.0m – 7.5m size segment, offering 6.3m, 6.8m and 7.3m options. Jumping from five to six battens between 5.7m and 6.3m, it was refined with a lighter weight foot and leech layout, and smaller clew eyelet panel with integrated 3D moulding to provide abrasion resistance. Finished with an excellent amount of detailing, it includes all the latest features such as a 3D moulded tack fairing with mesh pocket for downhaul rope, abrasion resistant beading that runs the length of the second lowest batten and customised printed x-ply around the perimeter of its main monofilm panels.

BRAND CLAIM
“Learning from our Firewing development program we modified the lower leech tension, increasing the bottom end power and locking this power low down in the sail. We then added negative leech curve to the outline to improve the control and by doing so increase the overall range of the sail. For the rider who wants to get up and moving quickly and maximise their fun on the water.”

PERFORMANCE
Rigged on a 460cm RDM mast, the Evolution has a moderate amount of luff curve in its leading edge, setting with shape low and forwards in its profile at rest. The leech opens progressively along its length as more tension is applied, providing the sail with a good degree of tuning range for varying conditions. One of the largest sails on test here, both in quoted sail area and increments, it is understandable that it feels its size on the water compared to others in the group. That said, with the centre of effort positioned low and forward in the draft, the sail is particularly balanced and even in both hands. As a gust hits, the Evolution’s depth expands thanks to the play in the luff tube and the thin Dacron panel that runs the length of the luff. This movement helps to soften the power delivery, making the Evolution both forgiving and comfortable to use for long periods. It is also an impressively fast sail, particularly off the wind. With its low clew eyelet position, the Evolution feels incredibly locked in, encouraging the rider into a more committed stance. Blasting over the back of chop, the breathability of the sail’s leading edge enables the sail to move around the rider, whilst the twist in the sail’s trailing edge seems to strike the right balance between response and efficiency. In transition, the Evolution provides the power and composure in entry, and whilst it rotates slower than some due to its low aspect, it powers up quickly and smoothly once sheeted in on the new tack for a purposeful exit.

THE VERDICT
The Evolution continues to impress, providing smooth power, balance and range with a natural aspiration for blasting in comfort.