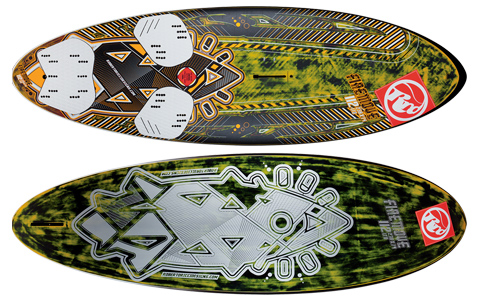 THE LOW-DOWN
The Firemove series has been a great hit for RRD and remains unaltered for another season, offering five boards between 102 and 140 litres over three different construction options – Ltd, Wood and E-Tech. This particular V2 model was unveiled in 2014 with more emphasis on its ‘bump and jump’ performance, whilst aiming to retain the original version’s early planing and manoeuvre credentials. It has a somewhat unique appearance in this group, with a pinched nose that also displays quite a bit of kick in its tip. Its outline is very rounded and as with most here has a flat deck around the centreline, becoming domed on the rails. Also worthy of note are the mass of footstrap options provided on the 112, going some way to suggesting how diverse the brand believes its application is.

BRAND CLAIM
“The wide body of these shapes allows better planing capacity by keeping a relatively short compact shape. Rig a wave sail and you can still plane quickly and manoeuvre like on a freestyle wave board, use a freeride or a two cam sail, and off you go. Full blast at top speed, keeping the same track of those freeriders around you. A fantastic free feeling that makes you think “Can I wave ride this board,” or “Can I go as high upwind as those slalom sailors?” then try this to make you happy…!”

PERFORMANCE
This is the third V2 Firemove we have tried and it is impressive how consistent the brand has captured the feel and essence of the Firemove throughout the sizes available in the range. The 112 planes early and accelerates easily up to a comfortable cruising speed, feeling secure and dependable underfoot. It rides effortlessly over confused sea states, the hull seeming to absorb any hard impact, which in turn allows the rider to adopt a relaxed upright and manoeuvre-oriented stance. The one word the test team kept using to describe the 112 was ‘smooth’. Loaded with a fast sail and taken onto idyllic flat water, it wasn’t as comfortable to lock into a blasting stance as others in the group. But as the conditions become more challenging the pendulum swings in favour of the Firemove, its shoulders sitting high and clear from water contact whilst its fluid nature and easy response allows you to gain advantage when the chips are down. And as with the other Firemoves we have tried, its gybing capacity can’t help but inspire, biting in effortlessly, the rails providing feedback throughout and enabling the board to come out of the turn with speed almost effortlessly, seeming to require little input from the rider. It really is a lot of fun in the corners and masks over failings in technique like no other – a real asset for the progressing rider and always a great attribute when used in coastal conditions.

THE VERDICT
The 112 upholds the Firemove’s established reputation for smooth, easy performance in varied sea states, coming into its own when the conditions turn on or when pushed into manoeuvres. A class act in the carve, it is a manoeuvre-oriented rider’s dream companion.