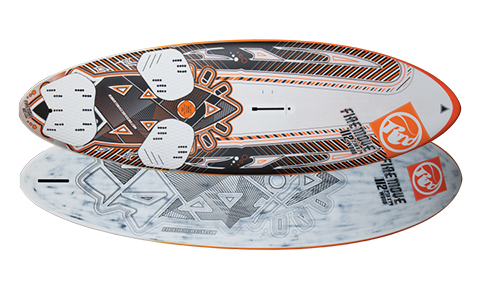 THE LOWDOWN
The Firemove is RRD’s wide-bodied freemove series, now in its third era, which was introduced last year and remains current for 2018. The second smallest in a four board lineup, the 110 is available in three construction options, tested here in the brand’s dearest LTD layup. Stated clearly as the “most wanted boards” in their range, the Firemove’s heritage for easy, accessible performance precedes it. There is nothing out of the ordinary in the 110’s design – wide and rounded, with a domed deck throughout tapering to thin rails … and distinctly more nose rocker than is seen in the other boards in the test group. The finish of the Firemove is very striking up close – with detailing in the deck’s non-slip and eye-catching craftsmanship in the hull as the surface transitions from high gloss finish in the nose to matt in the tail. Supplied with a quality MFC fin, thick dual density deckpads (peppered with strap-insert options), and four DaKine straps, will this Firemove have the minerals to uphold the reputation of its predecessors in the face of its latest rivals?.

BRAND CLAIM
“All in all we have kept the same feel of this magic board program, boosting the performance level on every new shape we have re-designed from scratch. The footstrap inserts have kept the possibility to use a more inboard position for choppy water or more “freeride use”. These inserts also allow the rider to position themselves in a more outboard position for flat water or “top speed” sailing.”

PERFORMANCE
Stepping onto the Firemove, it certainly feels smaller than its 74cm width would suggest, yet deliver power and it is one of the earliest out of the blocks. It is a supremely easy board to plane early on, requiring very little guidance or encouragement from the rider. Feeling balanced and conventional underfoot, it is easy to find the straps, settling the rider into a relaxed upright stance. Acceleration is also impressive – the Firemove just seems to spring to life and want to go. Drag racing it against its peers in this group does however show the Firemove up and confirm it is a freemove platform more than a straight-line performance freeride, as others describe themselves. Its speed seems to top out and you can’t push it hard to find that extra gear, the fin losing traction and spinning out if you push too hard. This is not a problem for most as the 110 still has a very respectable turn of speed, but for those that can’t help but be a bit more techy and love to load their fins for the odd white knuckle ride downwind, the Firemove will leave them wanting. Take it into rolling seas or classic coastal chop, and the 110 is back in the game – its rail-to-rail response is stunning, like a board 20L its junior. The nose rides high, clear of any danger, whilst the board glides through lulls without concern, linking gusts and making the most of the most challenging conditions. It would make a fantastic tutor for the progressing intermediate looking to crack their transitions, seeming to hold its speed instinctively through the turn. And as we mentioned earlier, its enthusiasm and response when placed on its rail makes it a master for developing those gybing skills in varied conditions.

THE VERDICT
More manoeuvre-oriented than blasting biased, the Firemove can be taken confidently into any environment, planing supremely early, with an easy relaxed and positive nature to make the most of whatever is put before it.