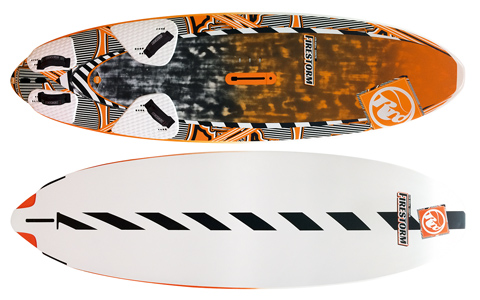 THE LOW-DOWN
The Firestorm series has been completely overhauled for 2016, shrinking from the five sizes of the V2 line-up to just three in this new generation. And there has been no shortage of development, with the RRD R&D team a reported 300 hours testing and 25 prototypes to the wiser before arriving at this point. As with past incarnations, the Firestorm V3 takes the outline and rocker-line of the X-Fire (the V7 X-Fire in this case), and refines it slightly to make the performance more accessible. In the brand’s promo video Roberto Ricci himself describes how the Firestorm’s tail has been made narrower, with smaller cutouts to reduce lift when overpowered without compromising early planing. Short and wide, at a glance the 123 has a decidedly boxy outline, accentuated by the raised wingers in the tail of the board by the back straps. With its low-rockered negative-domed nose, its wide point placed behind the track, minimalist deckpads and racy upright MFC fin, the Firestorm looks like it means business.

BRAND CLAIM
“Originally designed and trimmed to combine early planing, speed, control and easy gybing, the new Firestorm V3 line has been completely re-considered not only in terms of shape and details, but mainly for its program of use. We have understood that when you choose a new board around the program of “fast freeriding” the most important parameter is SPEED. So the whole concept of creating a 30% faster board whilst keeping early planing and control have given life to a completely new line of Firestorm boards: the VERSION 3.”

PERFORMANCE
In his summary to the camera, Roberto remarks that, “Speed cannot be cheated!” Well, perhaps the hours of R&D can’t be either! The new V3 Firestorm is an exciting, fast and above all captivating board to sail. Early to plane and rapid to accelerate, it sits high on the water’s surface, riding over the fin and providing masses of useable feedback. As the rider you can really sense the traction the fin has, whilst the short length of the board and width in the tail bestow fantastic access to its trim. Skipping over the water, the nose of the Firestorm sits very low to the deck, as if hunting excitedly for the next gust. The width in the tail also makes the rider’s stance quite square to the board and provides the impetus through the back foot to push upwind forcefully. In confused seas we were impressed with the control the Firestorm retains, anticipating its loose and lively nature might get the better of it … but none of it. Yes, it might require a little more input than others when charging over the back of chop to keep the shoulders high for example, but it’s occasions like these that add to the allure of the ride. And there is certainly no loss in excitement, the Firestorm constantly keeping the rider connected and informed of where the limits are. Carrying its speed and energy into the gybe, the V3 bites smoothly and progressively on its rail, its compact nature providing the confidence to push hard and project through tight turns, to great effect in challenging conditions.

THE VERDICT
The Firestorm has come of age, the V3 combining speed and control in a compact and incredibly responsive package, which is a lot of fun to ride.