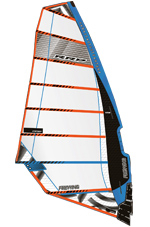 OVERVIEW
The fourth generation Firewing sees refinement and development from the MK3 throughout its sizes, focusing on more power and drive in the larger sizes and more control in the smaller sizes. It remains the only sail in this test group that incorporates 8 battens, and for 2016 we have the chance to try the Firewing’s Race Tuning System (RTS), replacing four battens for carbon options and increasing the cam count to four. It was a straightforward process to do so, with clear guidance in both the notes supplied with the RTS package and on the RRD website, following a tuition video from sail designer John Skye. Rigged on a Firewing C100 SDM mast, the cams can be popped onto the mast before you attach the boom, applying full tension to extend the looseness of the leech down to the RRD logo. The depth of the Firewing’s draft is relatively shallow compared to the rest in the group, the two clew eyelets very close together, allowing the rider to alter the boom incline according to preference.

BRAND CLAIM
“A 3 cam blaster aimed at getting the maximum speeds possible with minimum effort. Since its birth 3 years ago the Firewing has been about allowing everyone to reach their maximum speed potential. From setting records on the Namibia speed track, to World Cup slaloms, the Firewing gives top level performance in an easy to use package. For both the freerace rider looking to push their GPS record through to racers wanting to stand tall on the podium.”

PERFORMANCE
Used initially in its 3-cam set up, the Firewing feels balanced in the hands, yet doesn’t possess a great deal of bottom end power, the high luff curve and skin tension in the leading edge providing little movement for any purposeful pumping. Letting the pressure build as the wind increases, the Firewing quickly accelerates in the hands once its threshold is reached, the power delivery soft and manageable whilst it naturally adopts a committed locked in stance. The centre of effort is quite high and back, but locked in place and there is a built in softness to the foil, helping it to move around the rider and absorb any impact as you blast over heavy seas. This year we had a chance to try the Firewing with its RTS option … and we have to say it is worth every penny! Introducing the four carbon battens and extra cam, the form of the sail is completely remodelled. The profile of the sail is noticeably deeper and the pull generated more positive in the hands. Its bottom end grunt is improved fractionally and it certainly glides through lulls more efficiently, yet the biggest difference is the sail’s character in powered conditions. With the RTS in place, the Firewing is more akin to a full slalom sail, with a loose slippery top end and a hunger to keep accelerating.

THE VERDICT
Coming alive in power to overpowered conditions, the Firewing has a soft easy power delivery, complimented by the RTS system, which is a must to really unlock the sail’s potential.