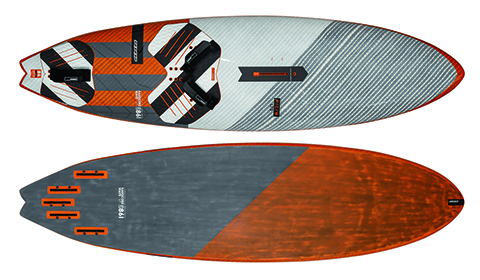 THE LOWDOWN
The seventh version of the Hardcore Wave from RRD was shaped to meet the demands of PWA star Alex Mussolini, the appearance of each board has altered significantly from their V6 predecessors, adding “speed and performance to make them the most versatile Hardcore ever.” The largest in the range, this 96, has an incredibly chunky profile, its deck possessing a massive constant dome, making its quoted volume come as no surprise. Starting with a swallowtail in the rear, the narrow tail quickly widens thanks to subtle wingers placed inline with the back of the side-fin boxes. The outline then expands progressively, giving it a particularly rounded appearance, helped all the more so by finishing in a pointed nose. The underside of the board is also very interesting, with mono-concave adopted throughout, washed with a double through the mid-section to help comfort the ride. Available solely in LTD construction, the Hardcore comes supplied with Da Kine Velcro straps, thick deckpads and a GRP thruster set from the excellent UK house that is K4 Fins.

BRAND CLAIM
“Compared to the previous V6, the new scoop-line is slightly flatter through the front section giving hugely improved speed and performance, but the pronounced kick through the tail maintains the radical turning ability. The new Hardcore comes with the Biaxial Innegra Carbon fibres on the deck, giving an impressive style and strength to the board.”

PERFORMANCE
Every bit as buoyant as its quoted volume and appearance help you to anticipate, the HCW releases onto the plane willingly as you turn it off the wind in a gust. The straps are easy to locate and the ride is comfortable and forgiving instead of clattery or nervous, as is often the case with mono-concave hulls. Quite corky and elevated in stance, it isn’t a rocket ship as such, but remains well mannered and smooth, cutting a graceful path through the water and gliding through lulls well. It can be sailed passively and in a relaxed style – just plug in and enjoy the ride. Yet if you want to push it, the HCW will certainly respond. It has a lovely bite in the turns, the dome to the deck meaning that it responds best to big, positive committed acts, rather than slashy sudden injections of pressure. There’s also genuine balance between both front and back foot riding styles, initiating the turn on the front foot and tightening it up mid-transition through more focus on the rear of the board. The narrow tail then helps to pivot the board at the apex and redirect it down the face. We used the board in both cross-offshore and cross-on conditions and have to say that whilst it is obviously biased towards large bold arcs on clean open wave faces, it performs admirably in tight cross-on rollers too. This is in part down to the excellent fins supplied, providing the drive through the turn and flex when required to forgive any mistiming, making rail-to-rail transitions easier. And whilst it certainly felt big being used in 4.2m weather, its temperament remained, allowing us to travel deep into the lee shore corner whilst riding waves, confident that we had the float to get back out as we played our ‘get out of jail free’ card.

THE VERDICT
Corky, early planing and mild tempered, the 96 lives up to its ‘hardcore’ mantra when pushed hard through committed riding styles, yet remains equally applicable for those with more relaxed and passive intentions.