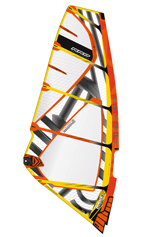 OVERVIEW
The Move enters its fifth generation, classed by RRD as their versatile option for onshore wave to freewave and onto freemove sailing. Available in half-metre increments from 4.2 to 7.2 (the two largest sizes in the range possessing six battens instead of five), the design has been refined in the smaller sizes with control in mind. Marginally taller and wider in this size than its predecessor, the MkV Move has a double seam around the window for improved durability and a new feature at every corner of the sail. There’s a new tack fairing and new head protection configuration at their respective ends of the mast, plus a new ‘U-Clew’ system at the boom end, the clew eyelet inset slightly to reduce the boom length.

BRAND CLAIM
“Whether its flat water blasting, bump and jump or waves, the Move does it all. The Move has proved over the years to be the most successful sail in our line up. This is for the rider that is after power, drive and stability, to maximize any conditions, on any board. From a large Firemove to small Wave Cult. The perfect “go anywhere” tool.”

PERFORMANCE
Designed by the UK’s own John Skye, the Move is easy to rig and set, guided by the trimming system printed along the seam in the top panel. The leech falls away progressively along its length whilst the sail retains plenty of rotation in the two battens either side of the boom. It has a conventional feel about it, making it straightforward to trim and fine-tune by playing the outhaul against the downhaul. Requiring positive outhaul tension to ensure smooth and easy rotation of the battens, the Move is instantly balanced and user-friendly on the water. Its power delivery is soft and progressive as the pressure builds, helped by the stretch bestowed by the large Dacron luff panel that runs the length of the mast. It’s a significant feature in the Move’s DNA, resulting in its drive being subtle and easy instead of sharp or jolting. Forgiving of both rider stance and technique, it doesn’t pull those less aware to their toes, but rather massages the board and pilot onto the plane. As the wind increases, the stability of the Move is secured by applying more tension, its centre of effort staying fixed in place as the upper panels twist and exhaust excess power efficiently. It’s a great contender for coastal blasting, the movement in the sail’s leading edge helping to absorb any clatter or impact from severe chop. In manoeuvre the Move provides real ease and patience in its feedback, if not the instant response of others here, making it a great engine for real world conditions.

THE VERDICT
As a “go anywhere, do anything” sail, the Move fits the bill well, providing a soft and forgiving power delivery, at home in any coastal environment and requiring little precision in its set for ‘rig-and-go’ practicality.