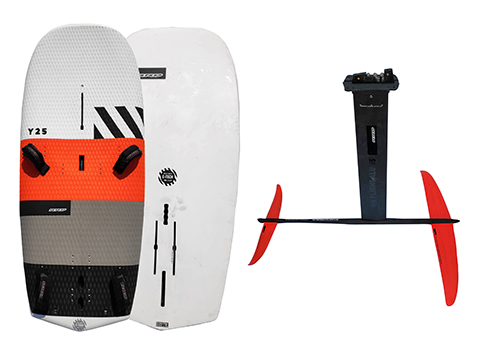 THEY SAY
It’s the newest and latest developed hydrofoil for freeride use. The WH FLIGHT ALU 85 V2 has its best performance in light wind conditions (7-18 knots), allowing you to enter the water with 7-8 knots and is extremely easy and fast.
Pocket Rocket: “180cm of length is a total breakthrough as it is the most fun and accessible foil board, it flies earlier than all the other boards we have tried, stays up foiling longer and easier and is still floating perfectly when uphauling a big sail.” – Roberto Ricci.

WE SAY
The WH Flight Alu 85 is in its second year of production, and comes with the same mast and 800 mm hybrid carbon front wing, yet a shorter fuselage at 110 cm and a broader tail wing. Supplied with various head options, it was first tested in a more conventional board before we introduced the Pocket Rocket into the equation! In marginal winds, the WH Flight certainly still has early planing potential and the long distance between mast and front wing getting the lift well forward. Being relatively high aspect in outline, the front wing does require some speed and water-flow over its surfaces before it starts to generate lift … and in lulls if the speed diminishes, the foil stalls sooner than most and will drop out of the sky. And yet, the WH Flight combats this with an impressive turn of speed, enabling the rider to point well and glide through lulls, mitigating the chances of stalling. Once comfortably powered, the foil is a pleasure to use, feeling directionally stable and very balanced, with just the right amount of measured response to control ride height. We are happy to report that the foil also feels so much more forgiving and manageable as the wind increases as well, the shorter fuselage and increased tail wingspan complimenting each other to reduce any kick-back or twitch without effecting speed or stability. In the gybe, the WH Flight carries its speed willingly into the turn, and remains smooth and responsive, so long as speed is maintained. We have to say, we were quite speculative before stepping on the Pocket Rocket, its stubby outline dreaming up visions of it being hard and uncompromising to use. We needn’t have worried. Carrying the board to the water, there’s a handle in the deck if you are launching without the sail … or a handle just in front of the foil box if launching complete with rig. It has a quoted volume of 122 litres, which does feel justified, the stability underfoot more than ample for an 80 kg rider uphauling. We actually resorted to uphauling more often than not – the chunkiness of the Pocket Rocket’s tail more akin to waterstarting on a 240L board – tough in marginal winds! It is just so buoyant, sitting high on the surface, making it hard to pull towards you. Another interesting feature is that the Pocket Rocket is not supplied with straps … and in the board’s recently released promotion photos/videos, RRD’s riders aren’t even using a harness. For now though, we resorted to our default of straps and harness to test its limits. Whilst its quoted sail range is up to 6.4m, it is certainly capable of carrying larger sails, using the sail to drive the initial motion before resorting to foil pumping to help release. The short no-nose outline helps to rock the board back on the foil, releasing early with efficient foil technique. We did try the Pocket Rocket with a lower aspect foil and have to say its light wind capacity was accentuated further still, albeit at the loss of speed. RRD suggest the use of their SH Flight with a convertible kit if you’d like to go down this route. Once going, the strap plugs in the Pocket Rocket force the rider into a particularly wide stance, which feels a little awkward to some, yet certainly helps to shift weight quickly to control ride height. The riding experience is quite exhilarating, the board feeling loose and electric and providing a heightened sense of connection; that everything is happening around you and involving you. Take the straps off though and the Pocket Rocket offers a whole new riding sensation. It’s such a pure experience: just clean, fun enjoyment – a new sense of freedom as you dance and carve across the water. Just as we found when we learnt how to foil for the first time, you find the initial experience eye opening yet quite tiring, mentally more than anything as your mind tries to catch up with what you are witnessing. We did become advocates for sailing without a harness as well, providing an extra feeling of liberation. The WH does require you to push the board deep off the wind initially as well, getting that flow of water over the foils before you start to work the foil. And yet you quickly adjust and learn to trust the level of grip provided by the extended EVA deckpad. One final comment – with its no nose outline, you’d be forgiven for thinking it would be impossible to tack … but again the wide shoulders and foil stability provided means that even this is easily achievable. A unique looking contender, the Pocket Rocket opens up a whole new pathway for windfoiling progression, and we have to say we’re big fans.