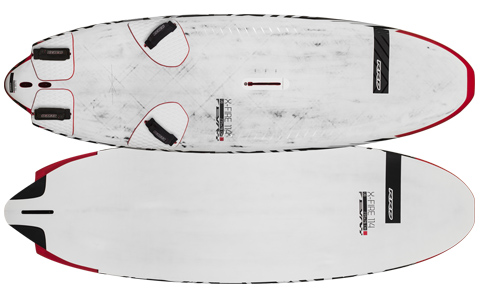 THE LOW-DOWN
RRD’ s literature for the X-Fire claims that 5 completely new designs are incorporated into the V8 series, yet the 114 V8 tested here has almost identical increments to its V7 predecessor, somewhat masking over any obvious change at first glance. Compare the designs though and you’ ll see the board’ s wide point has been moved further back in its outline, whilst volume has been distributed further forward. Both its rail shape and rocker line have also been refined, the brand claiming a smoother ride and better gybing credentials as a result. What does remain the same is the X-Fire’ s use of the brand’ s ‘ TT double outline system’– an extended cutout along the rail of the board’ s tail, making the width of the wetted section much narrower than the raised deck upon which the rider stands. It’ s as if the board has two tails, hence the name. In addition, the TT incorporates what the brand calls “Contact Patch Technology”– a curved profile under the wingers to help release and increase acceleration. With a clean uncomplicated graphic design, there’ s an attention to detail to the board’ s finish that can’ t help but draw you in (such as the diamond pattern in the deck’ s non-slip), giving it an air of quality.

BRAND CLAIM
“The all-new X- Fire range is born from our endless search for the perfect modern racing machine. Countless hours of design and testing has been put in by our winning international team in many locations around the world. The result is another thrilling performance from the PWA world champion boards used by Antoine Albeau.”

PERFORMANCE
Whilst its increments make it the obvious choice in the V8 range for this test group, on the water the 114 does feel the smallest underfoot. Nevertheless, in light to marginal winds and partnered with a 40cm fin, it can be pushed clear of the water through good pumping technique, gathering speed smoothly rather than instantaneously. However, it is when the 114 is used in familiar slalom riding styles, loading it with an efficient sail in powered conditions, that you really begin to understand its qualities. With a comfortable connected ride provided by the deck pad and straps, the X-Fire’s stance is very efficient and reliable, sitting low to the surface of the water and oozing confidence, encouraging the rider to lock in and push hard. The TT design means the deck’s width in the X-Fire’s tail is the widest in the group, making the rails very parallel and providing lots of feedback and traction through the back foot. As such, the X-Fire is more directionally biased than the others here, charging straight through any sea state instead of weaving a path through confused chop. And yet the rocker-line and low nose shape just seem to work, keeping the shoulders perfectly trimmed and clear of any danger. It is a novel feeling, enabling the rider to concentrate on the trim of the sail, assured that the board will ride cleanly over whatever is in its path. In the gybe the X-Fire thrives on a powerful style, driving hard through the back-foot to keep the arc of the turn tight so that it doesn’t level out or catch on its forward rail.

THE VERDICT
Properly powered, the X-Fire comes alive and charges through the harshest seas, with real directional prowess and efficiency that can’ t help but build confidence in the rider.