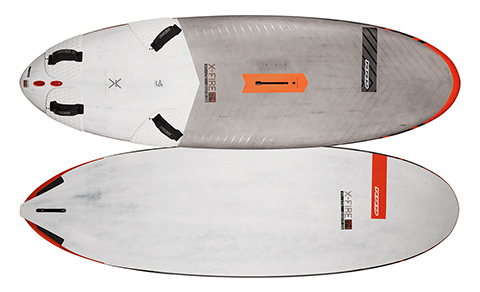 THE LOW-DOWN
The X-Fire enters its ninth iteration as a range for 2017, with five “completely new designs”, of which this 114 is one. The minimalist graphics of the V8 are adopted in a similar fashion to give the board a clean, uncomplicated look at first glance, the blood red on the nose and rails replaced with tango orange. Take a closer look however and the X-Fire’s design is anything but simplistic. Chunky in the tail and along much of the rail length, there is a significant concave scoop to the deck in the nose and track area, which extends right up to the front straps. Whilst there have been subtle changes to the rocker-line, rail shape and hull configuration, the two most significant alterations come in the form of a new outline, providing a refined balance (said to extend the ease and comfort of the ride), and new “super efficient and aggressive” cutouts in the tail, for improved water release. They are certainly some of the most far-reaching cutouts in the group, the top tiered cutout extending along the rail to encompass much of the board’s anticipated planing area. Supplied with Da Kine Velcro straps and thick 10mm deckpads, there is an extra wedge of EVA under the back deckpads, in order to raise the rider’s toes and improve comfort by mitigating back-leg burn. Another notable addition for 2017 is that the V9 is now ‘foil ready’, using a ‘foil box’ in the tail with additional carbon stringer insets to contend with the inevitable stresses associated.

BRAND CLAIM
“ The new explosive X-Fire V9 is born from our endless search for the perfect modern racing machine. Countless hours of design and testing have been put together yet again by our winning international team in locations all around the world. From the high winds and rough waves of Maui, South Africa, Tenerife and Israel to the light winds and flat waters of Lake Garda and Rome. The R&D team led by Arnon Dagan and team mates Andrea Rosati and Enrico Marroti have tested the X-Fires to the maximum.”

PERFORMANCE
Sitting poised and ready at rest, the X-Fire is directionally very stable and responds smoothly as power is delivered, accelerating with interest underfoot. In marginal wind strengths, the X-Fire feels a little underwhelmed, craving more power and drive; yet as the wind increases it gathers the momentum to really shine. Plough in the power and the board simply laps it up, trimming itself efficiently and dancing over the water’s surface. The most impressive characteristic of the X-Fire is its smooth riding style. Far from clattering over the water, it was the kindest on your knees and ankles, cushioning the ride from impact, even in the harshest chop. It is also incredibly controlled, the balance between the fin and mast foot position no doubt playing its part (the X-Fire’s fin box is the most forward positioned one in this test group). With the board’s control confirmed, the rider is left to experiment with their own posture and performance, the X-Fire responding positively to focussed rider input. The same can be said in the gybe, the 114 more than willing to conform, guided by the lead of the rider. As the wind increased and conditions became severe, we found ourselves falling for the X-Fire more and more – whilst retaining the capacity to perform, it was its ability to behave and forgive that became its most endearing asset. Gybing paints a similar picture, the X-Fire preferring input from the rider, but with the balance and volume distribution to compensate for clumsy technique.

THE VERDICT
Offering the smoothest ride in the group, the RRD exudes a stunning level of control, providing the rider with time to concentrate on their own performance and unlock the board’s potential further still.