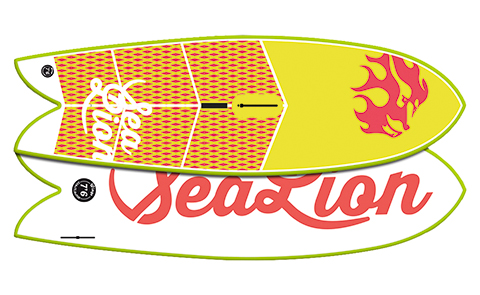 THEY SAY
With a single board, there’s a world that opens up to you: light-wind wave-riding, classic freeride, stand-up-paddle surfing, foil windsurfing on flat water, stand-up-paddle foil… there are no more limits; one only board to do everything!

WE SAY
The windSUP Sealion concept has been present in the AHD range for many years now and has rightly gained a real following. So much so, in fact, that the parent company have decided to evolve Sealion into a brand in its own right, with no less than six sizes in the range, stemming from a 10’ novice platform, to the Wings 7’6” we have here. Described as a refinement from the Classic 7’6”, it has thinned rails and a large mono-concave between the twinzer fins. Its outline is the endearing retro fish shape we have come to know and love, with a pointed nose leading to a large swallow tail in the rear, and its evenly domed deck covered entirely in diamond-grooved deck pad. Produced in Tunisia using the brand’s preferred one-shot construction technique,  it is certainly light in what Sealion call its ‘PVC Double Carbon Sandwich technology’, which they say has “a large patch of carbon positioned right under the rider’s feet up to the mast base.” The board comes in a number of colourways named either ‘80’s’ or ‘Rasta’ (seen here). Used initially as a SUP, the Sealion feels buoyant and easy under foot for its stated size, the extra width in the tail assisting in weight carrying and stability, whilst the twinzer fins provide the directional traction. We were also given the Wings 8’6” to test, its extra volume perceived to provide more stability, practicality and therefore appeal. However, with all test team members being less than 85 kg, the 7’6” easily proved stable and user-friendly enough to get on with – a pleasant surprise. When paddling, the board’s glide is reasonable, the nose and shoulders punching through any chop or white water. We got the chance to try it in small to medium waves and have to say it was a lot of fun, picking up the wave easily and gliding down the open face. It has a very clean carving nature, the rails and fins combining to provide just the right balance of grip and predictability. It holds its speed effortlessly through the carve and encourages the rider to push harder through the next corner to discover its limits, of which we were yet to find.

Plugging a sail onto the Sealion, the mast track enables you to play with the sail’s setup and position according to rig and rider size. The board again feels wonderfully compact yet balanced underfoot, the volume distribution enabling the rider to play with their stance position to account for style and efficiency. The twinzer configuration also means the 7’6” is no embarrassment heading upwind, edging the windward rail into the water and using its full length to keep the board tracking. It does take some power to release and plane, but was perfectly at home in float and ride conditions, using both wind and wave power to pop it onto the water’s surface and maximise enjoyment. It has real fluidity and ease, the domed deck feeling both comfortable and allowing for a smooth flowing rail-to-rail ride. And if the waves aren’t up to much, but the wind is in, then the board offers up the opportunity for a wind foil session. It currently does require the use of a Tuttle rather than the more popular deep Tuttle head connection for the foil, but does so as its partner company’s AFS Surf foil is a Tuttle head. However Sealion say, “from this summer onwards we will offer both possibilities – Tuttle and pedestal head option – to be chosen at point of order, as to keep the weight down we decided not to have both styles of boxes on the same board.” The board was supplied with the all-carbon Tuttle version of the AFS Surf Foil/S800 and with it in place, the Wings 7’6” proves it has a whole new side to its personality to explore. The Tuttle box screws provide an exact reference for where the foil is and by providing a little foil pumping to help it unstick, the lift comes early and actively. The Sealion again feels, crisp and responsive underfoot, its strapless nature encouraging an upright relaxed stance over the board. We found our feet coming closer together on the board, testament to its balance and ease, which in turn encourages you to carve it in a playful manner and pick up the smallest hint of any ripple to ride.