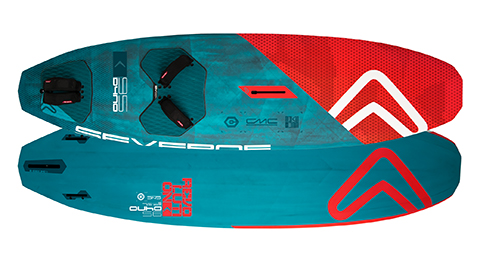 THE LOW-DOWN
The Dyno is Severne’s new Freewave board range, described as being based on the brand’s Nano waveboard series. And we can well believe it looking at the design of this 95L version more closely, having several novel features just as the Nano 83 has (tested in last month’s issue). Adopting a short yet relatively narrow outline akin to the compact waveboard concept, the Dyno’s rails are noticeably parallel, keeping width in the shoulders and stepped/wingered tail. The rails themselves are particularly sharp and defined in the tail, before becoming very tucked and rounded towards the bevels in the nose. That brings us onto the bottom shape of the Dyno, which is unlike anything else in the group. There’s a raised spine running through the centre of the board that helps to exaggerate the vee throughout most of its length. Couple this with deep double concaves and you really get a sense that designer James Hooper is a fan of interesting bottom shapes to define the riding sensation of his boards. The Dyno’s volume, footstraps and fins are then pushed to the rear of the board, the deck super-domed in the tail so that the rail remains thin. Produced in China using the brand’s exclusive compression moulding facility, the Dyno weighs in as the lightest board here and comes supplied with Severne’s own Velcro straps and a Hex4 Allen key. The idea is that this one tool can adjust and tension every component on Severne’s products, from the fins and straps on a board, to the batten on a sail (plus open a beer to celebrate!). The G10 fins provided use a Slotbox+ (a slot box with a locating pin in the front) in the side fins and a Powerbox central fin, so that the board can be used with a larger single fin for straight-line blasting work.

BRAND CLAIM
“Faster rocker lines and increased volume under foot make the Dyno super early planing and keep it charging through gusts and lulls. The compact size enables real use of all that speed – the Dyno is more than just capable in the air, it is a jumping machine. Aerial rotations, freestyle moves and straight up rocket air on demand.”

PERFORMANCE
We used the Dyno in a wave environment to start with and kept having to check we weren’t simply on a large wave board, such was its loose fluid riding style. It planes early, accelerates well and feels very comfortable around a break, tracking upwind easily and gliding smoothly over turbulent water. It likes to be used with a light handling high-aspect sail, letting the board fly and move freely. Fast and controlled, it is a great board to use in a bump and jump role, but really comes into its own when used on a wave face, the rearward stance and fin positions allowing the board to pivot and carve tightly on the tail. The thin rails grip beautifully to redirect the board, keeping speed and making the sort of sections you wouldn’t have thought possible on a 95L crossover board. Change the straps to their outboard positions, put a 30cm+ fin in the central Powerbox and the Dyno character is altered almost beyond recognition! The fin style has to be quite upright as the box is so far back in the board – too much rake and the board spins-out at will. We used a 32cm iFin, with a profile similar to C3’s Sting. Planing early, the Dyno accelerates well and cuts through the water serenely, the nose sitting low to the water whilst the board’s deep defined bottom-shape nullifies the harshest impacts.  Comfortable for long coastal voyages, it won’t be a match for the freerace or slalom boards out there, but considering the Dyno’s wave riding credentials as well, its ability to change its character is truly impressive.

THE VERDICT
The Dyno is the chameleon performer amongst the group – from potent wave riding weapon to coastal blaster, simply by changing its fin and strap positions. With its new-school feel, this Dyno kept us captivated every time we got it on the water.