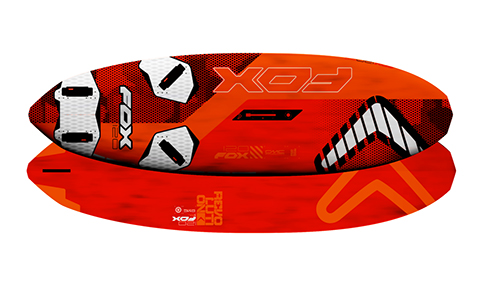 THE LOWDOWN
The Fox is the much anticipated performance freeride board range from Severne, first released onto the market midway through 2017. Designed by the brand’s adopted board shaper James Hooper and named after chief tester Ian Fox, it is a range of four boards that are designed around the requirements for blasting in everyday real world conditions. Produced in the brand’s exclusive China factory using a compression moulded composite technique, it has a number of eye-catching features that make it stand out. Firstly, its bottom shape is incredibly distinct, made so by a flat-rockered spine that runs through much of the board’s middle, off which a cavernous amount of vee and double concave flows, providing constant rocker through the rails. In profile the Fox is relatively chunky in the tail, yet thin in the nose, exacerbated even more so by bevels in the nose’s underside and a hollowing in the deck. There’s a hard edge to the rails throughout, stepped cutouts in the tail and a definite encouragement to wrap your back foot round the domed rail in the tail, much like you’d expect on a slalom board. It comes supplied with Severne’s own branded Velcro strap, thick contoured deckpads and an F-Series precision-milled G10 fin, designed specifically with the 120 in mind.

BRAND CLAIM
“Designed to take freeride to the next level, the Fox allows you to blast full speed through the choppiest water you can find. Continuous rocker, reduced tail width and extreme Vee provide unique levels of control. Bonus is the best gybe in the business. Don’t let the comfort deceive you – in real world conditions the Fox delivers unmatched high performance fun.”

PERFORMANCE
Directionally very stable whilst off the plane, the Fox 120 accelerates smoothly and actively as power is applied, the straps easy to find despite being relatively outboard. It is the most slalom natured board in the group, feeling fast from the off and thriving on power being pushed into it. The domed tail and thick pads feel so snug and comfortable underfoot, that you just keep ploughing the power in, whilst the fin provides the security to do so, and the low nose remains pinned to the deck. It points incredibly well, flying efficiently on the fin and keeping the rider’s heels high and clear as it charges over the water’s surface. Fast on all points of sail, in solid conditions the board’s power-hungry nature demands that it is partnered with a sail that can keep up with it, otherwise the rider’s stance begins to feel awkward and pulled out of shape. But that is not to say the Fox is a handful – far from it. The underside of the board gives some explanation for this, its deep vee parting the water and punishing any harsh chop. In the most violent seas, it’s as if you’re cheating – you brace yourself for impact, only for the board to cushion the blow as if it had built in suspension. The vee also helps the Fox through the turn – allowing you to use the full rail and enter the arc confidently, instead of bouncing tentatively over the back of chop. For those that love to blast around in real world conditions in complete comfort, it doesn’t come much more accessible than this.

THE VERDICT
The Fox 120 marries freeride ease with real world slalom performance for use in any sea-state. If you are looking for a loyal blasting weapon that comes into its own when the conditions turn on, the 120 is right up there.