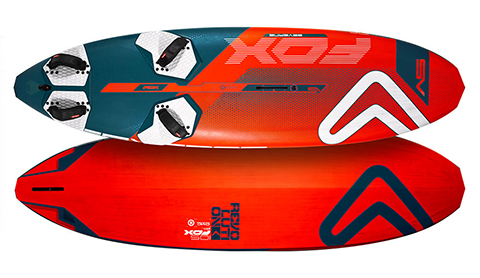 THE LOWDOWN
Described by Severne as their ‘Performance Freeride’ series, the four sizes available in the Fox range haven’t been altered in design for the new season, yet sport some so-called ‘upgrades’ to their package. Dressed in a new colour scheme, the concrete compression moulding process is said to have been refined, leading to greater manufacturing accuracy. Similarly, the jet-black G10 fin supplied is more accurately produced, using precision milling to achieve its intended shape. And as with all other products in the Severne range, from sails to boards, there is only one tool required – the Hex4 – to screw the straps into the board and fit the fin in place. A very simple yet effective concept. The thick dual density deckpads are also new, being thermoformed into shape to provide a dome for the board’s otherwise relatively flat deck, whilst raising the toes of both the rider’s feet. But putting all this aside, the most standout feature of the Fox 120 remains the flat-rockered spine that runs the length of the board’s centreline, creating some incredible vee in its bottom shape. It is combined with bevels in the nose, and double concave in the shoulders and mid-section, yet the vee is ubiquitous, its extent eclipsing what has been classed as pronounced in the past. We tested the Fox 120 last year and were impressed with its control in challenging conditions … so how does it compare against the latest crop of designs?

PERFORMANCE
Directionally very stable, the Fox tracks well, carrying weight and large rigs easily. In marginal winds, it does feel a little muted compare to others in the group, taking time and encouragement to fully release and lift off the fin. Instead, the Fox 120 is the biggest fan of being powered and loaded with an efficient, locked in sail, be it cammed or no-cammed. Achieve this and the 120 comes to life, pointing incredibly well and sitting clear of the water as it is driven purposefully through the back foot. In flat water and small chop, the Fox is comfortable and relaxing to use, possessing a real appetite for more power and inspiring the rider to hunt for the next gust, to explore its extra gear. And yet … you only really fully appreciate the Fox’s true capabilities when you’re charging through the most turbulent waters! When some of the other straight-line freerace thoroughbreds in this group begin to exhibit control issues, the 120 demonstrates that it’s in another league. The deep vee acts like beefed-up industrial suspension rods, cushioning the impact from the chaos occurring underneath. It instantly inflates rider confidence, encouraging them to maintain their committed stance and keep pushing, leaving their peers in their wake. So instead of picking their course through the maelstrom (as you tend to on other boards), the Fox breeds complacency, allowing the pilot to choose the shortest course once more and simply charge over the heaviest chop, certain that the board will cope. The same can be said in the gybe, the thin rails and bevels in the nose helping the board to bite and grip through the full length of its rail. It emboldens you to enter with speed and confidence rather than bouncing hesitantly over the back of the rollers. If you’re looking for a trusty partner for long coastal voyages of exploration, the Fox should be right at the top of your shopping list.

THE VERDICT
With refinements in fittings and a new visual update, the Fox remains a class act for real world blasting, and reigns supreme when the sea state is at its worst, exuding the confidence to keep pushing.