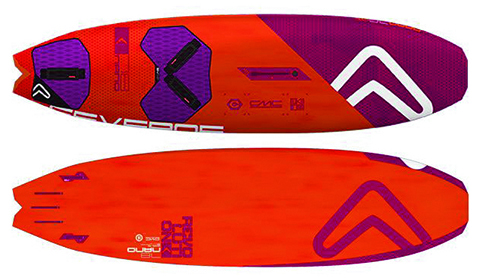 THE LOWDOWN
The Nano is Severne’s all-round wave board range and has recently seen the introduction of a small 73L version to compliment the four larger established designs. We tested the 83 last year, summing it up by stating it provided, “a fast, loose and comfortable ride, with razor sharp response through its tail.” This 93 has a similar compact design, with the same interesting concepts incorporated. Firstly, at the core of the design is a raised central spine that straightens the rockerline for early planing and speed, whilst dramatically increasing the vee through the board’s mid-section, enhanced by some deep concaves. The profile of the Nano is small compared to the others in this test group, being the shortest and narrowest here. With a boxy nose, parallel rails, stepped rail-line instead of wingers, and angular swallowtail – the outline of the Nano is anything but conventional. The rails of the Nano also draw attention, being thin in profile and incredibly sharp in the rear, before quickly tucking under the board and getting progressively fuller, as well as softening into large bevels in the nose. Compression moulded in their exclusive Chinese factory, the Nano comes supplied with thick 10mm deckpads, Severne’s own Velcro straps, five slotboxes (with a locating bar in the front for precise positioning) for setup versatility, and a thruster set of the brand’s own fins. A neat additional feature is that the straps and fin are secured into place using Severne’s Hex4 tool – the same Allen key design that can also be used to tighten the battens on the brand’s sails.

BRAND CLAIM
“Inspired by Tomo’s new-school surfboards, the Nano is a fresh wavesailing sensation. Its parallel rails mean the width is narrower than on a traditional board, which makes it feel like you’re sailing a smaller board. The efficiency of the parallel rails means you’re up and planing as if you were riding a bigger board.”

PERFORMANCE
Despite its small increments, the Nano 93 carries weight well, releasing onto the plane and accelerating quickly. In marginal winds it doesn’t glide through prolonged lulls as efficiently as others, due to the rider’s stance being focussed towards the back of the board, but by turning off the wind as well as providing more input to counter, the Nano will keep going. Comfortably powered, the 93 is fast, lively and playful underfoot. It blasts through confused chop as if on a mission, feeling responsive and controlled at all times. Being short, the natural stance on the Nano is narrower and further back than on more conventional designs, so any weight transfer between front and back foot has a greater influence. This translates to a different riding style than many others here – a more skatey back-footed style where you can almost pivot the board on its tail to make the most critical bottom turn. The wide tail and thin rails forgive clumsy technique and help to maintain speed at all times to project you back up the face with energy to spare. In cleaner faces the Nano’s speed is very welcome, its quick rail to rail response and compact nature making snappy turns easy, and providing the confidence to delay your top turn a little more, knowing that the wide nose and fuller forward rails will project well off the broken section.

THE VERDICT
Different to anything else in this group, the Nano is fast and playful, with a back-foot-biased riding style that may take some time to adjust to, but the reward in response makes it more than worthwhile.