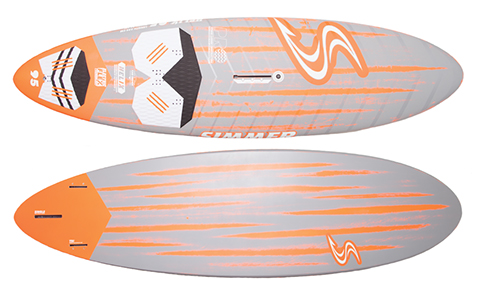 THE LOWDOWN
The Helix is in its second generation, classed by Simmer as their “fast high performance board that offers a fun and lively ride in a huge spectrum of conditions.” Whereas much of the inspiration for crossover boards unashamedly comes from a brand’s wave-specialist siblings, the Helix adopts a different tack, taking direction from the rocker-line of Simmer’s Freemove range. Its outline is very rounded and measured, being wide in the mid-section for stability, yet tapering gracefully to a thin pintail for crisp turns and control in rough seas. The underside sees a mix of vee with double concave throughout most of its length, yet merges into a subtle mono-concave between the straps, with the stated purpose of livening the ride up. Supplied with a carbon moulded 30 cm fin, the 105 is said to be “optimised for single fin” use, yet sports a couple of side fin slot boxes intended to extend its usability. Produced in Vietnam using the brand’s Pro hybrid carbon construction, it incorporates a PVC stringer and so-called ‘Electric Flex Technology’, said to impart extra energy through its flex, and additional structural strength. It comes complete with thick deckpads and Simmer’s own excellent Velcro straps, which set rather wide and large by default.

BRAND CLAIM
“With a single fin, the board is a fast and effective performer, that will give many freeride boards a run for their money. With the tri-fin setup the board becomes a versatile freewave performer that combines amazing planing performance with the best possible jumping threshold and an ability to handle waves from small onshore slop to serious side-shore overhead lips.”

PERFORMANCE
One of the longest and widest boards in this test group, the Helix has a very conventional and comfortable feel underfoot, providing plenty of stability before accelerating easily and progressively as power is delivered. The only footstrap options are focussed inboard around the centre-line, making them easy to find and encouraging the rider into a relaxed upright stance. With the supplied single fin in place, the Helix benefits from ample traction and offers the blend of a naturally fast cruising speed, combined with the manoeuvre potential to pick your way through troubled waters. If you try to load the board with an efficient sail and force it into a flat-water blasting role, the Helix is held back somewhat by the stance it dictates. You can feel your feet creeping out of the straps to get out onto the dome of the rail for purchase and comfort. Instead, the Simmer is most at home in a coastal bump-and-jump role, where its effortless acceleration, inherent speed and fluid, easy response make it a lot of fun to use. In the gybe, the Helix provides a master-class of ease and response to really captivate the pilot. Entering the turn smoothly, it has such a clean bite through its rails and thin pintail that it galvanises intent to push harder in the next corner. Even when sailing upwind we found ourselves gybing to turn, instead of tacking, to feed our rapidly growing addiction. Changing the fins for a thruster setup, we were expecting this carving aptitude to translate into wave-riding readiness, but instead found the Helix less willing than anticipated. In an ideal, well-timed wave setup it works well, gliding smoothly from rail to rail. Yet in typical cross-onshore wind-driven waves, we felt the Helix really had to be powered constantly though the bottom turn to keep the pressure on and driving through any prolonged turn. Moving everything back did help in part, yet you really have to command and judge the board’s path to get the most from it, rather than just letting it do its thing.

THE VERDICT
The Helix is a familiar and rewarding coastal bump-and-jump partner, asking little input from the rider, yet providing a fast, flowing and dependable ride whatever the sea state.