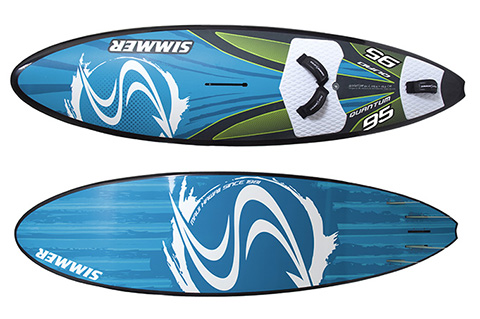 THE LOW-DOWN
The Quantum’s slightly stubby, snub nosed shape appears thicker throughout than the others here. Billed as Simmers “wind swell” design, it features 5 slot boxes for personalisation in set up, wherever you are.

BRAND CLAIM
The Quantums are extremely easy, efficient and all-around wave boards with single fin-like mobility and liveliness. Loose enough to be quickly whipped around in small waves, fast enough to enable big jumps in any conditions and controllable enough to keep delivering when the wind and the waves get serious. The extra width is a shortcut to better wave sailing for the progressing wave sailor but will also let the expert generate more power and speed from smaller or slower waves. (Sic.)

PERFORMANCE
Once again we had experienced the 85L Quantum last year and expected something similar. It turns out that this is exactly the case, and as with most of the brand claims published here, pretty accurate too. It does what they say it does, and does it well for a broad range of abilities and techniques. The only notable trait to watch out for when you first get on the Quantum is not to push too hard against the fins with your weight too forward on the board.You will break the adhesion of the fin set and spin-out. All is not lost but as you can re-attach the flow just as quickly with a tug in on your back foot. This is all the education you need as the ability to slide and then re-grip at will is what pleased everyone who sailed it on a wave. Not in the top three for early planing but the upwind ability is all there, planing or not it was one of the easiest to get up to the wall, challenging for top honours with the Tabou Pocket 94. Once in the waves the real fun begins and the Quantum starts to show off a touch. Using its solid acceleration and pointing ability to good effect let us harvest a high wave count given the conditions. We did manage to send it to the sky quite frequently as the urge to fly took over and the board remains controllable and compact here too. On the wave is where she shines and no riders failed to score some tidy rides. Put simply, the balanced shape with concaved hull does get more out of less in conditions like these (18-22 knots with small wind swell). It’s what it was intended for and what they have succeeded in delivering.

THE VERDICT
The very distinct character to the Quantum was universally praised for its opposing sensations. The most skatey and slidey of the bunch whilst still being secure and grippy! The soft, cushioned ride saves energy and protects you from the teeth rattling hits handed out by the chop. A clear Test Team favourite.