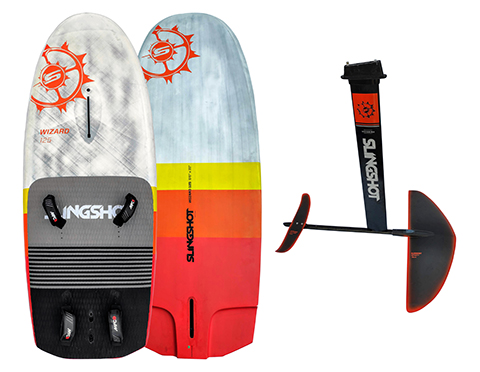 THEY SAY
The FWIND package, equipped with our new Infinity 76 wing, is designed to pack the most amount of range into a larger foil that has plenty of lift and stability. This wing delivers everything you may expect at low speeds: early planing, stability and easy gybes. What’s amazing is that it does it all at higher speeds as well!  Once you’ve mastered the basics of windsurf foiling, a shorter, more agile board is the natural evolution. All you need is enough volume to uphaul and pump to a plane. From there, the shorter the board, the more nimble and free it feels on the water (not to mention the easier it is to store and transport).

WE SAY
Slingshot’s Hoverglide modular concept is as broad as it is long, with a wealth of setups and permutations to suit conditions, riding styles and even five different sports! The Infinity front wing supplied with the FWind package is classed by Wyatt Miller as their best all-rounder, yet can be swapped out for more than five other wings to dramatically vary the foil’s lift and speed capabilities. In addition, the mast, fuselage, head fitting and tail wing can also be altered, whilst the foil’s geometry can be transformed by fixing the mast to three different points on the ‘Switch Fuse long’ fuesealge supplied, modifying the lift position to suit the board used. It is a wonderfully versatile system and really adds value for those interested in using it for various watersports, coming complete with a bag to protect it whilst still assembled. Although supplied with a 61 cm mast, we opted for the use of a 90 cm mast for the majority of this test, providing more practicality in the various conditions experienced. Generating lift at low speeds, the Slingshot offers a smooth easy response, feeling dependable and well mannered at all times. There’s no twitch or nervousness, building the confidence to trust it and explore. We tried it on various boards and its character remains consistent – super measured and reliable, flattering most. Tested with the Wizard supplied, we favoured the FWind with the mast fixed in position B, sitting clear of the front wing – the position suited for most windsurf boards. The FWind’s true forte is that it has such a playful character, it can be taken into any sea state and make an average session that much more enjoyable. It certainly isn’t the fastest here, but its manners and control always give you the confidence to push and drive it. When properly powered and travelling at speed, the front wing profile is unique in that it seems to actively drive down into the water, mitigating the chances of breaching. In doing so, it fills the rider with the added confidence to keep pushing. And if you do come off, the Safe-T downturned winglets will reduce the chance of any unfortunate injury! At just over 2.00 m in length, the Wizard would have been considered radical just a few seasons ago, yet its dimensions are quickly becoming the norm. Packing its volume into such a compact outline, it is chunky in profile, with a flat deck and a single set of inboard footstrap plug options. To get going, the Wizard relies on your ability to pump the foil as well as the sail, but with good technique (getting into the front strap early), flight can be initiated as early as on a more conventional board. Once flying, the short nose means swing weight is noticeably reduced, leaving the board feeling alive and loose underfoot. The flat deck also assists, giving instant lateral response to changes in heel and toe pressure – something that can’t help but inspire. We found ourselves carving through upwind and downwind 360s constantly, such is the addiction to carving. It’s ability to still produce lift at slow speeds and critical angles makes it a wonder for mastering the full foiling gybe, the Wizard’s inset straps easy to locate mid-transition.