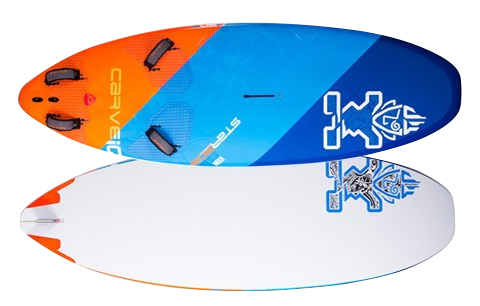 THE LOWDOWN
The CarveIQ is a new range in the Starboard ranks for 2018, taking all that was loved from its predecessors – the Carve and AtomIQ – and squeezing them into a series of six boards. The 114 is the shortest yet easily the widest board in this test group at 76cm, with a wide bulbous nose and relatively parallel rails between the mid-section and straps, before the tail pinches in to narrow rapidly behind the back straps. The deck sees a subtle scoop around the mast track and nose, before tapering to the rails and becoming significantly domed in the rear. On its underside, the Carve IQ is very clean and understated with a mix of vee and double concave throughout, before showing the simplest cut-outs in the tail. Tested in L.C.F. construction here, it comes supplied with Drake Slick footstraps (their top covers made from recycled plastic bottles), a set of relatively small, contoured and density-varied deckpads, and a unique Drake G10 fin. The fin itself is thin in profile at the tip, but very thick at its chord (intended to improve bottom end drive) giving it a real weight at 695g – a bit of an eyebrow-raiser to say the least. In this construction, it has got to be said the CarveIQ looks beautiful, with the glossy end-grain balsa finish showing through in the nose. It isn’t the lightest in the pack by some way, but the carbon Innegra rail band and attention to detail is enough to justify the price, even before you consider it is one of the most environmentally friendly boards produced. It is also available in Flax Balsa and 3DX, but if you can stretch to L.C.F. you won’t be disappointed.

BRAND CLAIM
“The CarveIQs are pure freeride boards that merge the AtomIQs and the Carve into one. The three smaller sizes are slim, thin and compact, replacing the AtomIQs. More aggressive, manoeuvrable boards with an exciting, connected feel and a very fast ride. Compared to the AtomIQs, they’re shorter, with a wider tail and a new bottom shape.”

PERFORMANCE
It’s no surprise that at 76cm wide, the CarveIQ was one of the more stable boards underfoot. It feels like a board 10L larger, and can carry an 8.5m sail with ease. That said, it does require more input than some here to really make the most of its early planing potential. You really need to turn it off the wind positively to get it to release, shifting your weight onto the tail at the earliest opportunity to drive against the fin. The straps are not the most intuitive to find either, the heel of your back foot resting off the board as the deckpad wraps around the rail. It’s not the most conventional in nature and does require the rider to adjust slightly … but the more we used the CarveIQ, the more we became engrossed in it! It has a fast, lively and endearing nature – something out of the ordinary, with a performance range that you can’t help but be inspired to explore. Fully powered the board has an intriguing stance, the tail of the board remaining connected to the water, the fin providing steadfast dependable traction to push against. The short low-rockered nose of the board sits low and yet because of the wide shoulders and large area in front of the track, it’s not uncommon to get a gust of wind under the nose, lifting it up and making the board fly on its fin. It’s not so much a control issue, but keeps the rider engaged and helps to provide extra connection with what is really happening. Happy to cover great distances in comfort, the deckpads provide supreme traction and cushioning as you ride over the surface. Tacking the CarveIQ is effortless, given the width in the shoulders, whilst in the gybe the dependable traction through the fin provides the confidence to push hard through the tail and tighten the turn, to which the board responds positively.

THE VERDICT
A beautiful looking board in the flesh, the CarveIQ takes a little time to explore, but dial into it and you’re soon enchanted by its fast, flighty and confident riding style, encouraging the pilot to be more pro-active themselves.