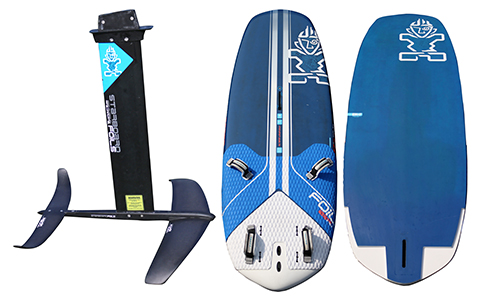 THEY SAY
The Starboard Freeride Aluminium Foil is our freeride model. This set uses a short aluminium mast for a lower, easier flight and our largest, thickest wings for more stability, smoother acceleration and the most controllable flight.
The Foil 122 is a plug and play freeride foil board: thin for maximum foil control, with 100% sharp rail edges for early planing and a clean water release even when touching down. It is designed purely as a foil board.

WE SAY
The skirt around the base of the Deep Tuttle head helps to locate the foil into the board, but in some instances it takes a little fine-tuning of the apertures in the board’s fin box to align the bolts and fix the foil in place. This wasn’t an issue in the Foil 122 as the boltholes of the box are already elongated. On the water, the Freeride was a pleasure to use from the off. Firstly it is so assured and stable on the water, the curvature in the wing tips helping the foil to maintain a straight path. The front wing has plenty of area and thickness, displacing the water to generate smooth progressive lift, whilst demanding little input from the rider. The fuselage of the Freeride is then quite short to promote flight response and control, whilst mitigating any twitch or loss in stiffness. This reduction in fuselage length could spell a reduction in stability, yet any loss is countered by its whopping 500cm² stabiliser wing, giving the Freeride a very distinct appearance amongst the test group. The result is an incredibly locked in and focussed feel, the Freeride gathering pace well and feeling incredibly dependable underfoot. Its most impressive asset, however, is its simply massive wind range, which can largely be attributed to the shape and virtues of the front wing. Capable of generating lift at low speeds in marginal winds, its thickness and large camber also mean that it will continue to generate lift at impossibly steep angles. Take it into strong winds and its predictable stability is always there, yet if things start getting too much you can adopt a less committed stance over the board and sustain flight at half-speed, almost stalling the board on its tail and dumping the sail’s power to reduce pressure. In the gybe the Freeride soon gains your trust, its wide wings providing a secure foundation to give time and stability throughout the turn. A superb platform upon which to nurture your love for foiling and develop your skills, the beauty of the Starboard model is its modular setup, meaning you can add a new wing or mast as you progress. At £1149.00, the Freeride is one of the more expensive foils on test, yet it is clear as soon as you use it that considerable R&D has taken place to justify the price.
The Foil 122 is quite unique in appearance with hard rails throughout, a distinctly parallel outline and minimal rocker throughout. On the water however, it is an ideal compliment to the Freeride, amplifying and reflecting the foil’s comfortable, user-friendly nature. It releases quickly as you pump the sail and push the board forward, the wide tail providing the stability as you shift your weight back early. There are lots of footstrap options to help cater for rider weights, riding styles and foil types and the deck pad is extended right across the tail of the board for additional traction. It is super thin in the tail, helping to extend a real sense of connection with the foil whilst you’re in flight. The hard rails through the front of the board then help to reduce the risk of the nose catching or tripping, should you suffer an undue breach and touchdown. At 75cm wide, the Foil 122 isn’t comfortable being used with sails much bigger than 7.5m, and such is its form that it certainly has no crossover for use with a fin. But for foiling bliss for use with sails of 7.0m and smaller, the Foil 122 is a class act.